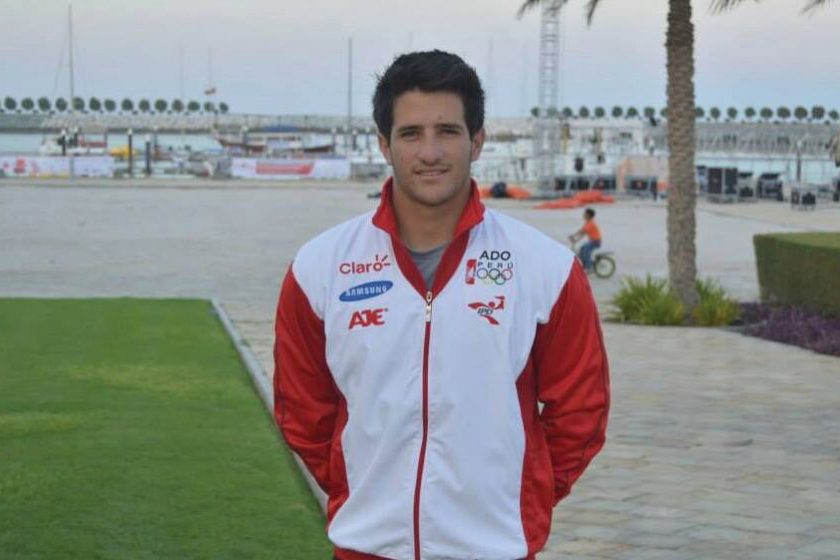 What was your first boat?
An Optimist

How old were you when you first sailed a Laser?
15 years old.

Why did you choose the Laser?
I tried both the International 420 and the Laser. I chose the Laser because I had the right size and weight for the boat and was used to sailing alone.

Who introduced you to sailing?
I was taken for rides on my grandfather’s 42-foot classic wooden sailboat. My parents signed me on the yacht club’s Optimist sailing school at the age of 7, and then I was put into the team. We had a fleet of around 80 boats when I started sailing, pretty big for a country like Peru. Peru has done pretty good internationally in the Optimist class, having both individual and team racing world titles.

Everything I have achieved, I owe to my family. They got me started in this sport. Since then, sailing has turned into my passion and the centre of my life. I will always be thankful to them for all their support during good times, and also hard times. For example during my last years sailing the Opti, where I was too big for the boat, I got frustrated, and the pressure was so big, that I even considered quitting sailing as an option.

Where in Peru did you learn to sail?
I learned to sail in Ancón. It’s a beach one hour to the north of Lima (the capital). That’s where I used to spend my summers. My favourite place to sail is Paracas, in Peru. It has wind almost every day, a nice climate, and great sailing conditions.

What are the sailing conditions like in that area of Peru?
We have 4 different courses where the regattas take place, they are all on the Pacific coastline. They are all pretty different – from really big waves with chop, to really flat and shifty conditions. In one of our venues we get a sea breeze of 15 – 25 knots every single day from 12pm, there are also light wind venues. It is a complete range of conditions preparing us for anything that we will face abroad.

What’s the sailing scene like in Peru? Did you have much competition to sail against?
When I sailed the Optis we had around 80 boats sailing in every regatta. The level was amazing and I would have lots of competition. In the Laser it was a little bit different, before my generation graduated from Optimist, the 4.7, Radial, and Standard Laser fleets were not very big. We had more than 60 boats laying around but no people to sail them. Once my generation graduated from the Optimist, the 4.7 fleet grew to about 15 boats, the Radial nationals had around 30 boats, and we had around 10 sailors in the full rig. I managed to win every national championship that I sailed in the Laser: two 4.7, two Radial, and one Standard. After that I left for college and have not taken part in national regattas.

Have you attended sailing clinics?
I did, when I was sailing the 4.7 and Radial, I went to the Canary Islands a few times. I learned a lot – they had a really competitive fleet of boats.

Which university are you attending and what are you studying?
I am a Business Administration Major at the College Of Charleston; USA. It won the best all around team title in the 2014/15 season, and I contributed by winning the Single Handed National Championship in Lasers.

Was your choice of university influenced by their sailing facilities?
My decision for College of Charleston was influenced mainly by their sailing team, I knew there were sailors like Juan Maegli and Erique Arathoon attending the school. After talking to them I was sure that it was where I wanted to be. I managed to coincide with Juan only a year, but Enrique is still here – we sail and train together.

Tell us about your university sailing team.
Our sailing team has two coaches and a director of sailing. They are all very experienced in lots of types of sailing; one of them even did an Olympic campaign in the 470 class. They are really understanding and help me with all my campaign and also in college sailing.

Top Sailing Achievements?
In the Laser 4.7 I managed to finish sixth at the Worlds. In the Radial I got 5th at the Youth ISAF Worlds and won South Americans twice. In my first Laser Standard World Championship in Oman 2013, I was really excited after achieving the gold fleet. I won the U21 South American Championship two times and finished 4th in the overall fleet. Last year I managed to finish 3rd at the Under 21 Worlds in France. Finally, I finished 24th after having been sitting in 16th at the Worlds in Canada this year (the second ILCA Worlds I have sailed). This is the result that gave me the first out of the nine spots that were being offered to the remaining qualifying countries for the Olympics. I also managed to win my first race ever in a World Championship.

Do you have any sponsors?
Magic Marine are one of my sponsors. I also have two media partners in Peru, one is a sports tv channel and the other a magazine. They help me create exposure so that I can get sponsors that can help me economically. Right now, the government is helping me a lot economically, but we are talking with some other companies in Peru that might become financial sponsors.

Training for the Olympics is a big commitment – how do you balance training and studying?
I usually do all my physical training in the mornings, then I go to class right after. From 1 pm till 6 pm I concentrate on training on the water, Charleston has really good and varied conditions. At night I usually do homework and some stretching. So far, that routine has not brought me any problems, I will try and keep it that way.

What is your training programme?
I train on the water 6 days a week and go to the gym every day of the week, I also cycle twice or three times a week. I sometimes play sports like squash or basketball.

Do you have a training partner?
There is a sailor from El Salvador in my school, his name is Enrique Arathoon. He has also qualified for the Olympics in the Laser. We have another Laser sailor from Hong Kong who just joined the school, his name is Gerald Williams. He is a little younger so his goal is to qualify for the 2020 Olympics in Tokyo. The three of us try to match our schedules and train together as much as we can.

How does it feel to represent Peru in the Olympics?
Well, we have had Peruvian sailors in three Olympic games, for Athens and Beijing they all went by wildcard invitation. However, Paloma Schmidt qualified for the London 2012 Olympics in the Laser Radial class. I am the first Peruvian to ever qualify in the Men’s Laser class.

What do you think about Robert Scheidt’s return?
I have been lucky enough to sail against him since 2013, when he came back to the Laser, actually, one of his first regattas after his return was one of my first regattas in the Laser Standard. I think we both met our goals – he ended up winning those Worlds in Oman 2013 and I managed to make the gold fleet. Since he is one of the main figures in the whole sport of sailing, I do get motivated every time I get to sail against him.

What is Peru’s approach to its young athletes? Have you had much support from your country?
Support for the youth has increased recently. However, Peruvian sport got stuck for a while because the government would ask for results before giving economic support for athletes. We then had to explain to them that in order to get results, they needed to invest in us first, that it was really difficult to reach that top level without any previous investment. Now, there are programs that select the best youth athletes and help them in order for them to achieve their goals. I have received support from my country and I receive more each day, especially after qualifying my country for the games.

What are your future goals and aspirations?
I have three future main goals. The first one is to achieve a medal at the 2019 Pan-American Games in Lima, Peru. The second one is to finish in medal position at the Tokyo 2020 Olympics. The third one is to make a top three in a world championship event.

Most influential person?
My dad, he has showed me the right way ever since I was a kid. He has helped me make life-changing decisions that have been positive most of the time. He helped me be disciplined and hard working. Finally, he was the one who introduced me to the sport I love, and since then has supported me in every possible way!