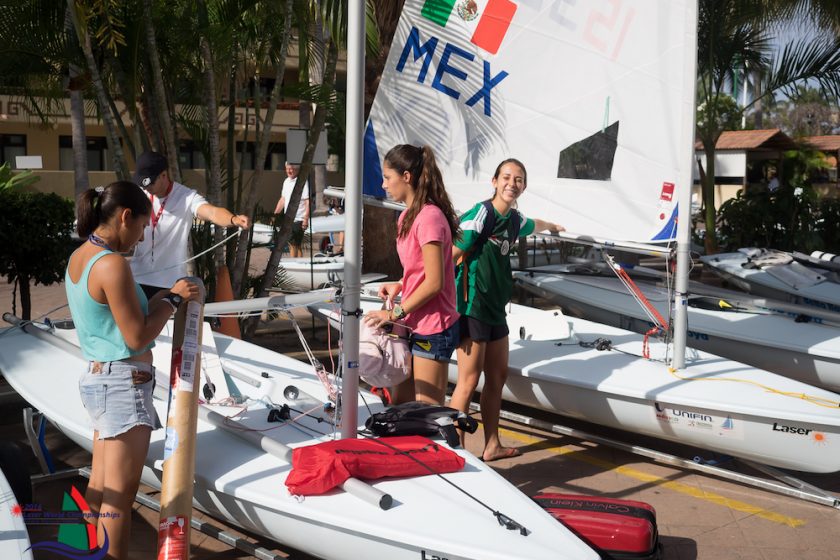 The 2016 Laser Radial Women’s World Championship, hosted by the Vallarta Yacht Club, is ready to begin. Participants completed equipment inspection and registration in the morning, and some sailors practiced in the afternoon, with others spending the time on equipment preparation or resting up for the upcoming seven days of racing.

Seventy-three sailors representing 39 countries are here to compete, including many Olympians. Lijia Xu, from China, earned a Bronze in 2008 and a Gold in 2012. Tania Elias Calles, of Mexico, competed in both Games, finishing top-ten in 2012. Many others aspire to compete in the upcoming games in 2016. But some are here to learn, knowing that the road to the Olympics is long and hard and requires many years of dedication and practice. It’s all about learning and having fun.

One practice race was held in the afternoon in southwest winds of about 6 knots, less than expected, perhaps because the overcast skies reduced the thermals. A left shift on that first beat led to a change course for the second leg, and the RC had some practice, too.

Secretary of Tourism of Nayarit, Lic. Omar Camarena González welcomed the sailors to Puerto Vallarta during the opening ceremonies in the evening, along with Jeff Martin, President of the International Laser Class Association (ILCA), Luis Barrios, President of the Laser Class Association in Mexico, and Dan Green, Commodore of the host Vallarta Yacht Club. A Mariachi band led the group to dinner at the yacht club.