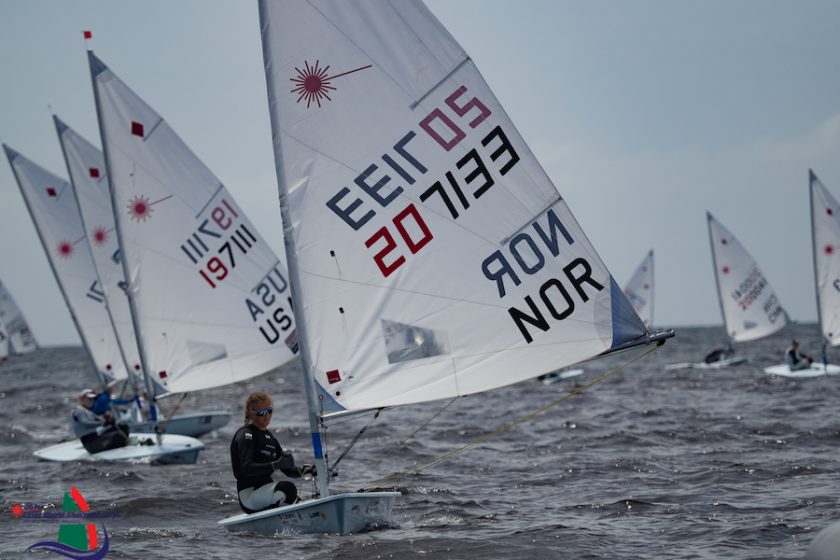 Today was the fourth and final day of Qualifying Races, in which the two fleets (Yellow and Blue) are balanced with a mix of competitors of all score totals.  The competitors will now be split into Gold and Silver fleets for the remaining three days of competition.

The starting sequence for the first race (R7 for Yellow) began at 1400h, but a shift to the right led to a postponement.  After settling in at about 10 knots from WSW, this fleet started cleanly, but a general recall for the Blue Fleet gave time for the wind to shift back to the left.  Race committee adjusted the course and the Blue Fleet started under a black flag restriction in 12-14 knots of building breeze and clearing skies.

But the wind oscillations in that first hour foretold the challenges to race committee for the afternoon.  A general recall for R8-Yellow led to further postponements as the race committee adjusted marks and the line as the wind continued to oscillate, and lessen.  That fleet started, but the race was abandoned on the first beat as the winds became less stable, with variability in strength and direction across the course.  The Blue Fleet never started, and all competitors were sent in for the day.

This closes the Qualifying Series.  The scores in all races still count to a sailor’s final score, but now the Gold Fleet will contain the top sailors, based on the Qualifying races.  These sailors will be competing for the Championship. Marit Bouwmeester (NED) and Paige Railey (USA) still hold the top two places.  Alison Young (GBR) has moved into third place, followed by Erika Reinecke (USA), and Gintare Scheidt (LTU).