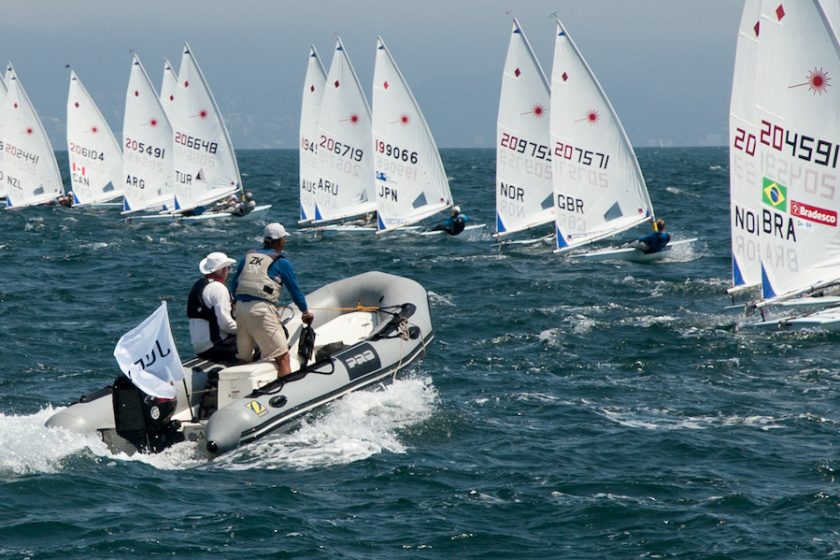 It took five attempts, but Race 8, the first race of the Finals Series, started just before 1430h under clear skies on Banderas Bay.  The first attempt led to a general recall, but the three subsequent attempts faltered when Race Committee postponed during the starting sequence as the wind shifted left, then right, finally settling in from the southwest.

After a clean start for the Gold fleet, the Silver fleet had clean start on the inner loop of the trapezoid course.  The wind direction remained mostly steady, and built as the afternoon progressed.  Both fleets started cleanly in Race 9 and the sailors were headed to the harbor before 1700h.

The course layout didn’t change during the afternoon’s racing, but oscillations around the average led to gains and losses for the sailors.  Several of the top ten competitors ended up using Race 9 as their single discard.  When Race 10 is completed, a second discard becomes available.

At the end of the day, Alison Young (GBR) leads the pack, followed by Marit Bouwmeester (NED), Paige Railey (USA), Gintare Scheidt (LTU), and Anne-Marie Rindom (DEN).  Only ten points separate the top five competitors, and the places will likely shuffle after tomorrow’s races, especially when the second discard becomes available.  As of now, Boumeester stands to gain to the most from the second discard.

A great day of racing, and hopefully more to come in the remaining two days of the Championship.