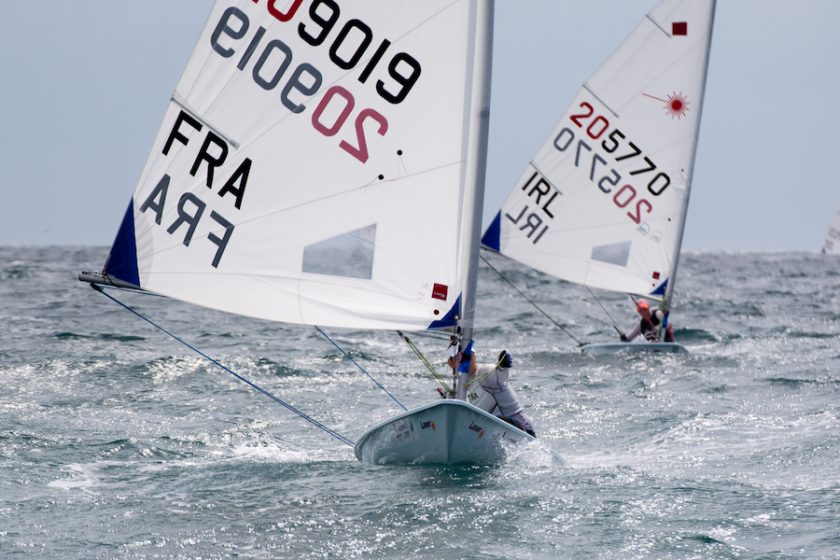 Finishing in the top five in both races today, Paige Railey (USA) moved up to claim the lead in the Gold fleet at the end of Day 6.  Marit Bouwmeester (NED) remains in second, followed Alison Young (GBR), Anne-Marie Rindom (DEN), and Gintare Scheidt (LTU).

Race 10 started in 8-10 knots of a southwesterly breeze under mostly clear skies on Banderas Bay.  The first start in the Gold fleet led to a general recall, but they started cleanly under a black flag (disqualification for starting early) on the second attempt.  The Silver fleet also had aggressive starts, with general recalls and several competitors disqualified under the black flag.

The breeze shifted to the right, and built to 16, knots as the afternoon progressed.  The stronger breeze led to larger waves than we’ve seen this week, benefitting those sailors who could best work the waves.

The start of Race 11 was delayed as the westerly wind settled in.  But clouds began to appear, and the wind began to fade after both fleets had started.  The race committee shortened the race for both fleets after the second windward leg.

Tomorrow is the final day of the competition, with two races scheduled for each fleet.  At the end of the day, the Laser Class will have a new Women’s World Champion.