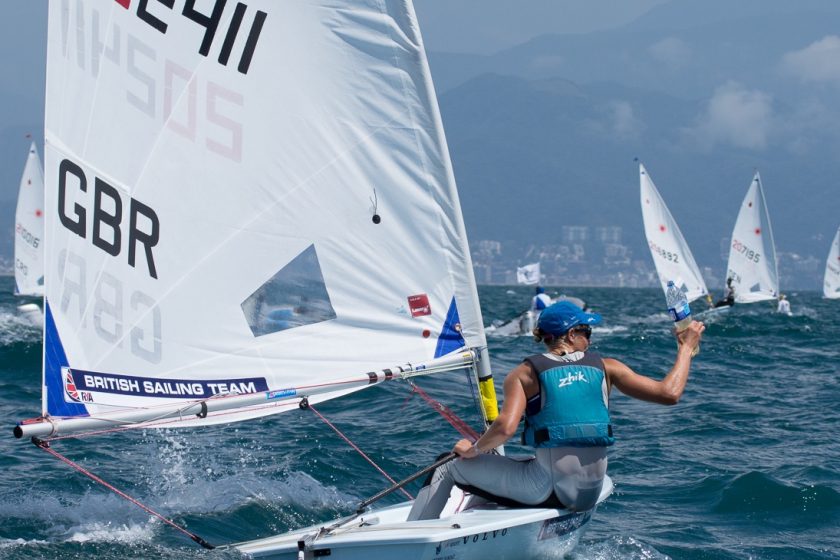 Under sunny skies on Banderas Bay, Alison Young (GBR) edged past Paige Railey (USA) with a win in the final race to claim the World Championship by one point.  It was a difficult conclusion for Railey, who was leading the regatta going into the final day.  Anne-Marie Rindom (DEN) moved up to third, followed by Marit Bouwmeester (NED), who dropped to fourth after a disappointing first race, and Gintare Scheidt (LTU).

The Gold fleet had a clean start in the first race (Race F12) at 1340h in 8-10 knots of a SSW breeze.  Most of the fleet tacked to port early in the first leg, looking for the right shift that has been the afternoon pattern, although it didn’t materialize that first leg.

Gintare Scheidt (LTU) claimed the first mark and held the lead for the race.  The wind built, and race committee extended the length of the second upwind leg on the outside of the trapezoid course.  Young and Railey fought it out for a top-five finish, with Young taking it, but Railey still leading in total points.

The wind shifted right for the second race (Race F13) and built to 12-14 knots, but with patches that dropped below 10 knots.  After a general recall, the second start was clean.  Young claimed the lead early on and held it to the end.  Railey needed a fourth or better to win the championship, but fell two places short.  Still, she had a very consistent regatta, and is poised to do well at the Olympics in Rio this summer.\

In the Silver Fleet, Silvia Zennaro (ITA) sailed a strong Finals Series, with four top-three finishes, to win over Agata Barwinski (POL), followed by Annalise Murphy (IRL).  There was great racing in Mexico this week.  This event is followed by several other Laser World Championships, all hosted by the Vallarta Yacht Club.