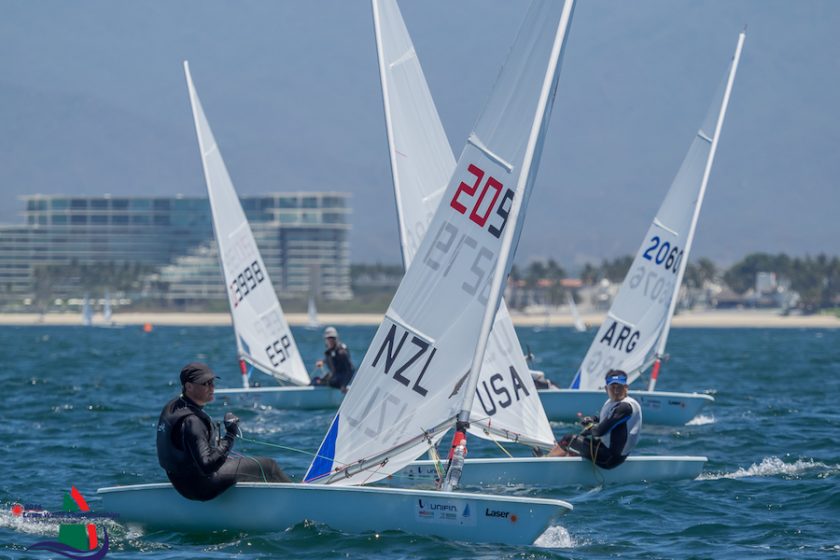 Clear skies and milder breeze inaugurated Day 1 of the Laser Master World Championship – Radial Division.  The first race for the Apprentice & Masters division started just after the scheduled 1300h start time in 8-10 knots of a southerly breeze.  The other two starts (Grand Masters, followed by Great Grand Masters and 75+) followed soon after.

The wind began to shift right as it built, and race committee set up on a SSW heading for the second race.  The first fleet started cleanly, but the second fleet was a bit more aggressive and race committee used a black flag restriction after a general recall, and several sailors were disqualified for crossing the line early.

After Day 1, the pecking order in the 12-boat Apprentice division seems established, with Scott Leith (NZL), Jon Emmett (GBR), and Alejandro Rabago (MEX) finishing 1-2-3 in both races.  Carlos Edwardo Wanderley (BRA) won both races in the 28-boat Masters division, but the finishes were mixed after that.

Jeff Loosemore and Greg Adams, both representing Australia, had top-3 finishes in the 49-boat Grand Master division, closely followed by several other sailors. Robert Lowndes (AUS) and William Symes (USA) had top-3 finishes in the Great Grand Master division (36 boats).  In the 75 and over fleet (8 boats), Peter Seidenberg and David Hartman, both representing the United States, traded 1-2 finishes, followed by Kerry Waraker (AUS).

But there are five more days of racing on Banderas Bay before this event concludes on Saturday.  Lots can and will happen before the next World Champion is decided!