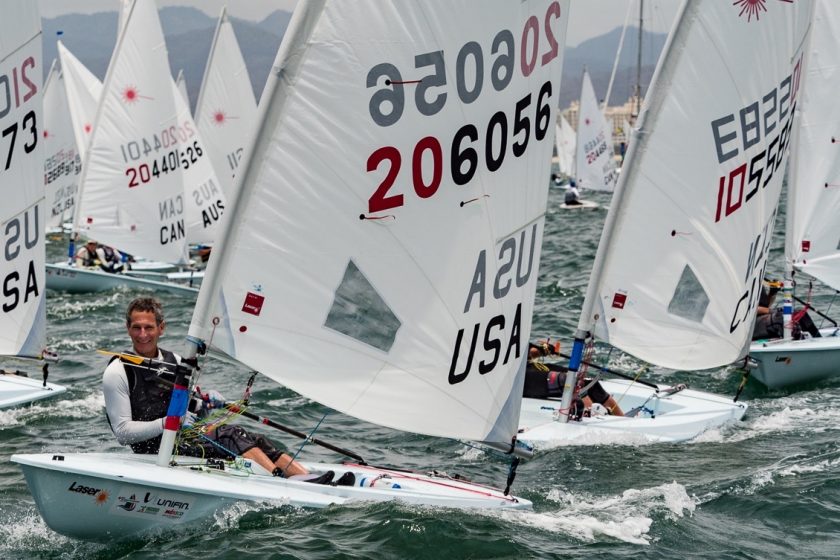 An aggressive penultimate race day, with several general recalls, and more than a few Black-Flag Disqualifications (BFD) – over-early, with no opportunity to make up for it.  But Race Committee did complete Race 9 and Race 10 under a moderate southwest breeze, with wind reaching into the double-digits (knots), but never really into the teens.

Scott Leith (NZL) solidified his lead in the Apprentice division with a pair of bullets today, followed by Jon Emmett (GBR) with a pair of seconds.  Carlos Edwardo Weberley (BRA) also did well in the Masters division with a 5th and a 3rd.  His closest competition, Richard Blakey (NZL), won the final race, but needed to discard a 14th.

In the Grand Master division, Vanessa Dudley (AUS) remained in front with 5-3 finishes and a four point lead.  Jeff Loosemore, also representing Australia, had to discard a BFD in the first race today, but posted a win in the second race to remain in second by five points.  Luis Castro (BRA) holds third place, winning the first race today, but adding a double-digit finish to his score in the second.

Robert Lowdnes (AUS) and William Symes (USA) traded 1-2 finishes today and remain in the lead of the Great Grand Master division, but Michael Kinnear (GBR) dropped back with a pair of double-digit finishes today, neither of which were discarded.

Tomorrow is the final race day of this event, with the champion for each division decided after two more scheduled races.  One more day…time will tell!