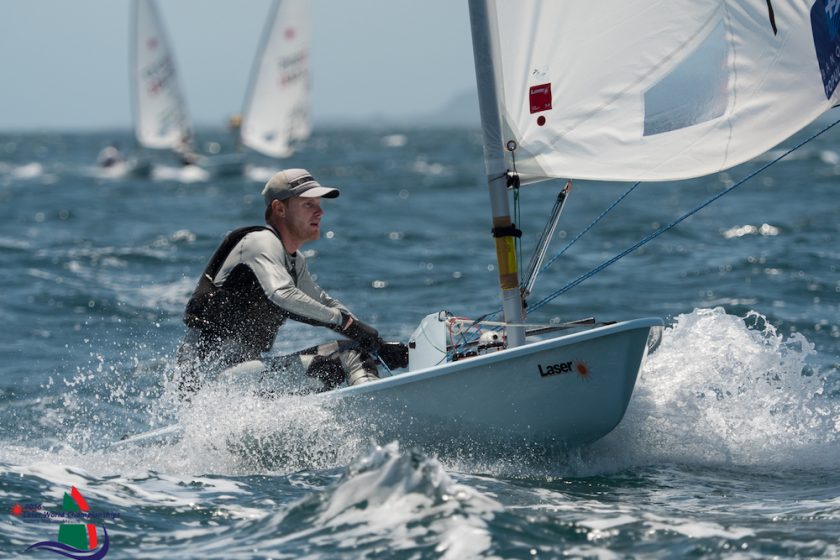 Nick Thompson Tightens His Grip on the Laser World Championship

Another day of champagne sailing in Riviera Nayarit, Mexico saw defending champion, Nick Thompson of Great Britain, extend his lead in the Laser Standard Men’s World Championship. Thompson not only posted the best result of the day by 8 points, but more importantly he put 15 points on his nearest rival, Jean-Bapiste Bernaz of France, to solidify his position on top of the leader board.
Once again Thompson chose the pin end of the start line for the first race in an 8-10 knot wind. As the start gun approached he decided to bail out early, gybe round and come back to the line on port tack. He found a hole with clear wind and worked the middle of the course as the fleet spread wide to round the first mark 5th in a tightly packed fleet led by Kristian Ruth and Francesco Marrai of Italy. Marrai passed Ruth on the reach to the outer loop and then extended throughout the race to take the winner’s gun as the wind continued to increase. Thompson unusually had a bad downwind and dropped to tenth place, a position he protected for the rest of the race.
The wind increased to 15-18 knots for the start of the second race. As the fleet spread along the line a confident Thompson chose to start at the committee boat end. He tacked early on to port and then skillfully worked the right side of the course. Meanwhile Marrai was not so lucky – receiving a yellow flag kinetics penalty from the jury, which required him to retire from the race.
Thompson, fighting hard, worked his way back from the right hand side of the course to meet the rest of the fleet converging on the first mark. This time another Italian, Giovanni Cocculuto, led around the mark followed by Argentina’s Julio Alsogaray, Thompson and a very tight chasing pack.
The reach was alive with waves and spray as they raced down the first reach. Thompson seemed in his element. Comfortable in the knowledge that the sea breeze had stabilized, he set about attacking the lead. By the end of the next upwind leg Thompson had achieved his goal and led to the finish to score his fourth first place of the championship.
To guarantee the defense of his title, Thompson has to finish second or better in one of the two remaining races. Not the easiest of tasks in this talented fleet but at least he now has proved to himself and his rivals that he is more than capable of delivering!
Overall Results after 12 races with 2 discards
1. Nick Thompson GBR 34pts
2. Jean-Baptiste Bernaz FRA 53pts
3. Pavlos Kontides CYP 65pts
4. Matthew Wearn AUS 65pts
5. Robert Scheidt BRA 74pts
6. Philipp Buhl GER 76pts
7. Marco Gallo ITA 79pts
8. Tom Burton 79pts
9. Kristian Ruth NOR 82pts
10. Rutger van Schaardenburg NED 84pts
For more information:
Event Website – http://www.laserworlds2016.org/index.php/competitors-2/laser-standard-men
Results – http://www.laserworlds2016.org/index.php/mstand-results
Photos – http://jldigitalmedia.zenfolio.com/f161465080
Video – https://www.youtube.com/playlist?list=PLQj9rPN_fgFBw49XBZTLb4p56WPzOhx9m