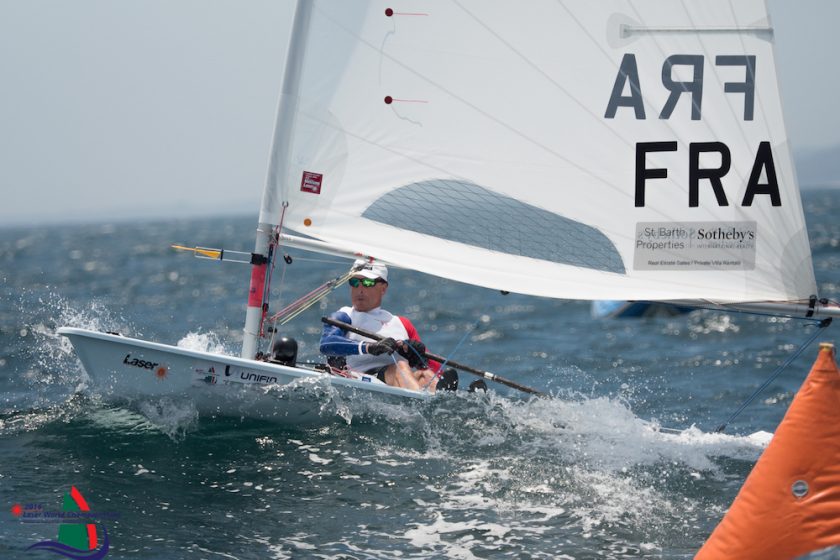 Nothing seems to change the forecast here in Riviera Nayarit, Mexico – wind, sun and waves means perfect Laser racing conditions prevailed once again for the Laser Standard Masters Worlds. This part of the coast is known for its reliable thermal winds, and today did not disappoint as the Laser Masters sailors took to the water for races 3 and 4 of the twelve race series.
As anticipated, the day’s first race was started in 8 knots winds just after the scheduled 1 p.m. start time. Also, as anticipated, the wind quickly built to 15 knots by the end of the race and held for the rest of the afternoon. Banderas Bay dished out ideal sailing conditions with a nice short chop to keep things interesting upwind, and a larger ocean swell to add to the excitement of the downwind legs.
Although the conventional wisdom in a west coast sea breeze is to favor the right side of the course, in today’s races sailors needed to protect the middle of the course in order to reach the top. According to Canadian, Al Clark, “There were definitely lanes of pressure out there and I mainly tried to play the middle of the upwind legs. The left definitely paid off late in the day. Nick Page went left of the second upwind leg of the last race and made big gains. I was able to cross him and hold on for the win, but it looked close for a while.” Clark won the day’s final race and currently sits in third place in the 39-boat Grand Masters Division behind New Zealand’s Nick Page and leader Gavin Dagley from Australia.
In a repeat of yesterday’s performance, Australia’s Mark Bethwaite scored a perfect day with two more bullets in the Great Grand Masters Division. According to Bethwaite, “This place is sensational! There’s a great sea breeze that fills in every day and a nice chop to slash through to windward and ride downwind.” Following Bethwaite, Texan, Doug Peckover, found his consistency with a pair of second place finishes to hold second place overall.
In the Masters Division, Brett Beyer of Australia extended his lead with two more first place finishes. But close behind are American, Ernesto Rodriquez, and Kiwi, Andrew Dellabarca, tied for second place with 9 points each.
Racing continues tomorrow in the 12-race series. If two races are completed tomorrow, Wednesday will be a lay-day to give the sailors (and the regatta organizers) a much deserved rest before the conclusion of the event.
First held in 1980, the Laser Masters World Championship is organized annually for sailors age 35 and over. Sailors compete in various divisions based on their ages: Apprentice Masters – age 35 to 44, Masters – age 45 to 54, Grand Masters – age 55 to 64, and Great Grand Masters – age 65 and over. Unlike previous years, this year’s event was sailed on two separate weeks, one for Laser Radial sailors and one for Laser Standard sailors.
Top-Three Standings by Division:
Apprentice Masters Division:
1) Pablo Rabago MEX 3pts
2) Guilherme Roth BRA 5pts
3) Alejandro Rabago MEX 9pts
Masters Division:
1) Brett Beyer AUS 3pts
2) Ernesto Rodriguez USA 9pts
3) Andrew Dellabarca NZL 9pts
Grand Masters Division:
1) Gavin Dagley AUS 5pts
2) Nick Page NZL 8pts
3) Allan Clark CAN 10pts
Great Grand Masters Division:
1) Mark Bethwaite AUS 3pts
2) Doug Peckover USA 6pts
3) James Temple AUS 10pts
For more information:
Event Website – http://www.laserworlds2016.org/index.php/competitors-2/laser-standard-men
Results – http://www.laserworlds2016.org/index.php/mstand-results
Photos – http://jldigitalmedia.zenfolio.com/f161465080
Video – https://www.youtube.com/playlist?list=PLQj9rPN_fgFBw49XBZTLb4p56WPzOhx9m
Laser Class Website – http://www.laserinternational.org