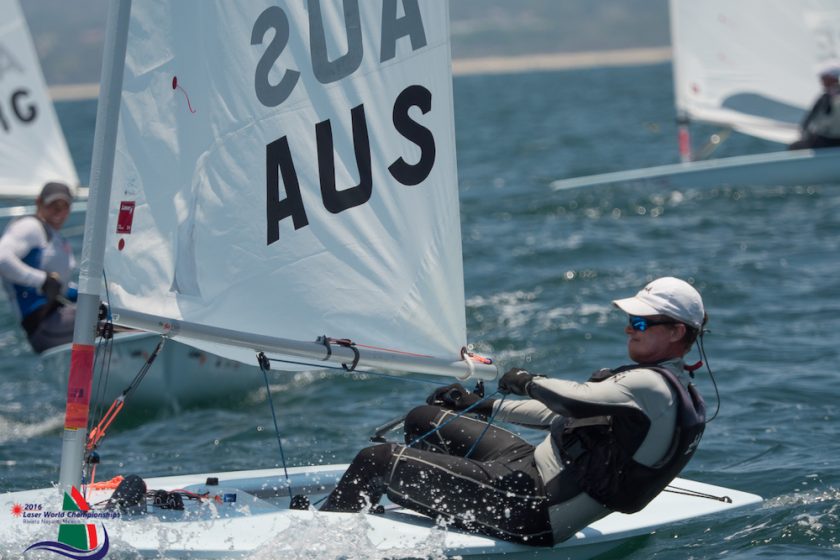 (Riviera Nayarit, Mexico) Rested and recovered after yesterday’s lay-day, the sailors returned to the water with an on-time start and a moderate southwest breeze to complete two more races in the Laser Standard Masters World Championship.

The area surrounding the regatta headquarters at Paradise Village Resort offers a wide variety of activities for the sailors to enjoy during their downtime, including golf, tennis, surfing, spa treatments, jungle tours, fishing, zip lining, or just relaxing by the pool. But by far the most enjoyable activity available here has got to be racing a Laser against world-class competition in the pristine, warm waters off Riviera Nayarit, Mexico.
A light haze over the ocean today kept the thermal breeze from fully developing, but sailors were treated to a moderate 8-11 knot breeze that provided very tactical and tight racing.
Although the wind mainly shifted right over the course of the day, it was the sailors who protected the middle of the course who had the most success. Allan Clark from Canada won the first race of the day in the Grand Masters Division in spite of overplaying the right side of the first beat. On the first run, Clark chased down the leaders, who had played the middle of the first beat, and then extended on the next upwind leg to earn the victory.
In what he calls “Ricky Bobby style,” (i.e. either first or last) Clark subsequently earned a Black Flag disqualification in the second race, but remains in third place overall. Australia’s Gavin Dagley leads the division while Cristian Herman of Chile showed great upwind speed to win the day’s second race and remain in second place overall.
Mark Bethwaite of Australia continues his impressive string of bullets to lead the Great Grand Masters Division with a perfect score line. American, Doug Peckover remains in second overall, but posted a sixth place in today’s second race to keep the overall standings interesting. Peckover leads Australian James Temple by 10 points, a margin that may or may not hold to the conclusion of the event.
In the Masters Division, Brett Beyer of Australia won the day’s first race, but made a few uncharacteristic mistakes in the second race to finish third. With those mistakes, Beyer left the door open and New Zealander Andrew Dellabarca and American Ernesto Rodriguez were happy to walk though it to finish first and second. With those scores, Dellabarca and Rodriguez sit in second and third place overall at the top of a tightly grouped leader board.
In the Apprentice Division, Pablo Rabago of Mexico and Guilherme Roth of Brazil split first and second place finishes to keep hold of the top two spots.
Races 9 and 10 of the twelve-race series are scheduled for tomorrow. And of course when you’re sailing in paradise, the forecast is once again for perfect sailing conditions.
Top-Three Standings by Division:
Apprentice Masters Division:
1) Pablo Rabago MEX 8pts
2) Guilherme Roth BRA 12pts
3) Alejandro Rabago MEX 20pts
Masters Division:
1) Brett Beyer AUS 9pts
2) Andrew Dellabarca NZL 27pts
3) Ernesto Rodriguez USA 28pts
Grand Masters Division:
1) Gavin Dagley AUS 21pts
2) Cristian Herman CHI 26pts
3) Allan Clark CAN 33pts
Great Grand Masters Division:
1) Mark Bethwaite AUS 7pts
2) Doug Peckover USA 16pts
3) James Temple AUS 26pts
For more information:
Event Website – http://www.laserworlds2016.org/index.php/competitors-2/laser-standard-men
Results – http://www.laserworlds2016.org/index.php/mstand-results
Photos – http://jldigitalmedia.zenfolio.com/f161465080
Video – https://www.youtube.com/playlist?list=PLQj9rPN_fgFBw49XBZTLb4p56WPzOhx9m
Laser Class Website – http://www.laserinternational.org
First held in 1980, the Laser Masters World Championship is organized annually for sailors age 35 and over. Sailors compete in various divisions based on their ages: Apprentice Masters – age 35 to 44, Masters – age 45 to 54, Grand Masters – age 55 to 64, and Great Grand Masters – age 65 and over. Unlike previous years, this year’s event was sailed on two separate weeks, one for Laser Radial sailors and one for Laser Standard sailors.