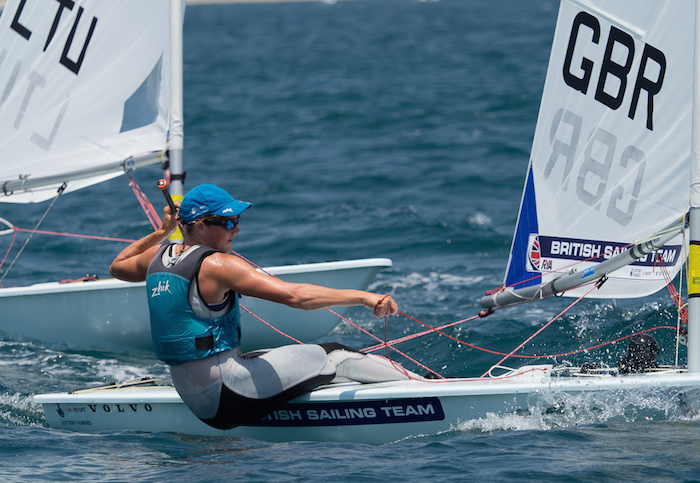 Alison Young – talks to Jeff Martin just after winning her world title at the 2016 Laser Radial World Championship in Mexico!

Congratulations you are the new World Champion – how does it feel?
Pretty cool. I didn’t really expect it – going in today our fleet was so close. There were about five girls that could have won so it was really nice to come out with a victory.

What were your goals at this regatta?
We had a few areas and styles that my coach and I were working on – a few decision making ideas and a few techniques that we’ve moved forward so that’s good. But we’ve still got a lot of work to do before Rio.

What point in the regatta did you think you might have a chance of the title?
After the first day of finals I thought I had put myself in a good position and was leading after that but then I had a poor second day. The thing is it’s Laser racing so it is always going to be tight and it’s always going to come down to the very last race so I just had to stick to my home game.

What went through your mind last night?
Just chill out and try not to think about sailing for too long. I just wanted to give myself the best shot for today.

Talk me through today – there was no wind. You were third going into the last day of racing. Did you have a strategy?
I was kind of sitting on shore and thinking is there going to be one race, two races? I was a few points behind the leader so I just had to do the best I could in the race and hope that would be enough!

Do you realise you are the first women’s world champion that the Brits have had?
Yes apparently so! We have had women Olympic champions before so this year Rio is the ultimate goal. There is lots of work to do here before then to keep moving forward because we know that when we get to Rio, there are going to be seven or eight girls scrapping it out hard for the medals. It’s going to be a tough regatta out there.

So from here you are going to Hyères?
Yes next stop is Hyères Regatta – we have a few goals to work on there.

When do you go out to Rio? Have you been down there much already?
We’ve already done a few trips . We are going in May for a training camp to learn some more about that venue and adapt technique. It’s a great place to sail – a really challenging venue with a huge variety of conditions. I think the winner out there is going to be a good all rounder that keeps their head.

I understand the organisers have introduced a few more courses to give a choice of seven?
Yes they have put on three areas outside and four areas inside. So no two days are going to be the same. We are going to have to be very adaptable to changing wind conditions and changing sea states.

Take me through your sailing career.
I started sailing at about 9 years old in the Optimist but I was never a very good Opi sailor. I spent 18 months in a Topper which was great fun and then moved into the Radial as that is the youth class that we sail in the UK. Since then I’ve stuck with the Radial. I’m 28 now and it’s been over ten years of Radial sailing. I bounced into university for a bit but I’ve been full time since 2008.

Who are your inspirations?
British Sailing team has a great history of being successful at the Games – there are lots of sailors there whose achievements you aspire to. Andrew Simpson stands out – he was a great sailor and a really good guy. He has helped me out in the past.

And after Rio?
After Rio is Tokyo!

You revealed one of your secrets tonight – slack-lining! Do you think it helps your sailing?
It’s something I picked up last year. It might be good for balance and core body strength but it’s mainly just for fun

For young sailors who are moving out of Optimists or Toppers what are your top three tips to improve their sailing?
Find a good coach – someone you can communicate and work well with, keep challenging yourself and enjoy it!