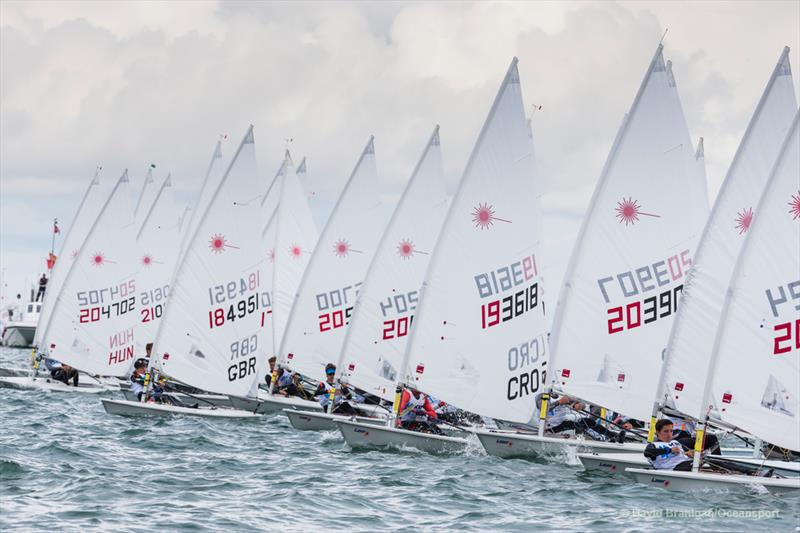 Ireland, Croatia, USA and the Cayman Islands were four countries that made the most of the day’s sub ten–knot breezes, each winning a race in their respective divisions of the 229–boat boys fleet.

But for all the on–the–water success of the day, there was also plenty of sailors among the 350 competing promising improvements tomorrow.

Sailors tackled offshore winds gusting up to 12–knots but sometimes the summer breeze was as low as three knots for each of the qualifying races.

Winds from anywhere between 225 and 300 degrees were strong enough to keep the dinghies moving through the small chop and tide but there was little opportunity for hiking. Upwind, the fastest sailors sought the strongest lines of pressure coming off the shore. Downwind, the on–the water umpires were active, with 28 rule 42 penalties for rocking and pumping infringements.

Back ashore at the Royal St. George Yacht Club in Dun Laoghaire harbour the youth sailors gave their first impressions of the Dublin race track.

‘The winds are too shifty and the water is too cold! I’m going to have to learn how to sail all over again in this place’, joked Israeli green fleet sailor Yam Lauber who counted a 21.

Course area B, under Rio Olympic Race officer Con Murphy, completed its full programme but London 2012 Race Officer Jack Roy on course A was forced to abandon all three fleets half way through the second race when there was a major wind shift.

‘This bay’s a good place to sail but the shifts are random. I’d a good first race but let’s not talk about the second’, said Great Britain’s Arthur Brown from Royal Burnham YC on the river Crouch.

‘I sailed today by concentrating on the clouds and following the wind’, said the number two Spanish sailor from Murcia.

In home nation news, Connacht champion Ewan McMahon from Howth Yacht Club was a race winner in the blue division and after the first qualifying race in the girl’s fleet, his club–mate Aoife Hopkins was 13th from 76.

The first race of the girls fleet was Caroline Rosmo. There was no second race result available at the time of publication.

In the mens division, Ireland’s Ronan Wallace had a race win, the other race of the day in the 42–boat fleet was won by Martin Manzoli Lowy of Brazil.