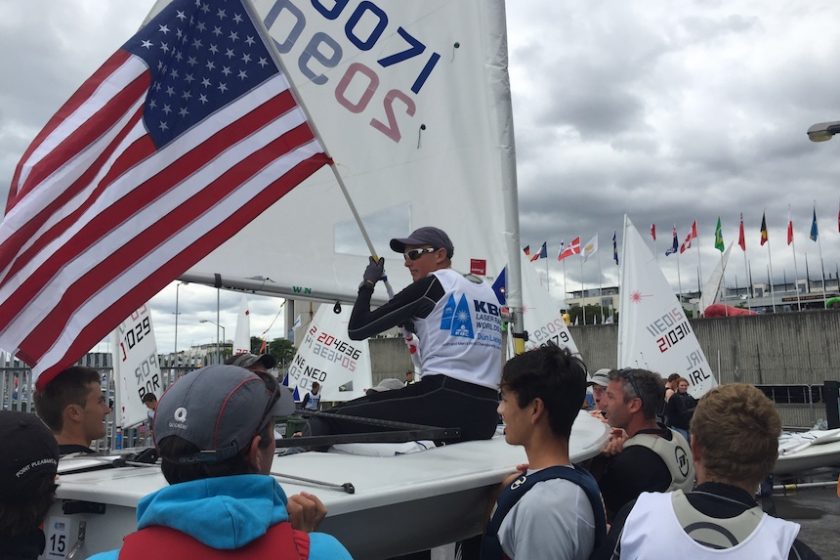 The decision to launch early at the Royal St. George Yacht Club bore fruit this morning as three more races in the week long series were completed, bringing the curtain down on the biggest regatta sailed in Ireland this year.

In a very positive test of the depth of talent of Irish youth sailing, five Irish boys made the gold fleet cut in the largest 229–boat fleet. Royal Cork’s Johnny Durcan was eighth, the host club’s Conor O’Beirne was 12th, Liam Glynn was 31st and Ronan Walsh 47th.

Marshall – ninth at the 2015 championships – lifted the World trophy in Dun Laoghaire in style, clearly benefiting from his year out of High School spent as training partner to America’s Rio Radial Representative, Paige Railey.

Although Marshall described this week’s Dublin Bay conditions as ‘tough as sailing gets’, the Boston 18–year–old managed with a very consistent series, (counting eight results in the top five) to lead the boys fleet from start to finish. He slipped today in a tricky race nine, however, discarding a 33. In a plucky finish, and with two races left to sail, the Irish Connacht champion succeeded in narrowing the overall points gap.

By the final race, if the Howth Yacht Club sailor had beaten Marshall, and he had finished outside the top seven, the title would have gone to Ireland but in the end, it went Marshall’s way by a margin of five points. Third overall was Spaniard Rafael de la Hoz Tuells some 11–points adrift.

McMahon adds World Silver to last year’s European Silver in a stand–out season for the Dubliner. He returns to action in just over a fortnight at the Laser Radial Youth Europeans in Tallinn, Estonia.

One of the first to congratulate McMahon when he came ashore at the Royal St. George YC slipway was Ireland’s only Olympic sailing medalist, David Wilkins. The 1980 silver medal winner helmsman was one of a large number of volunteer sailors who helped to run the 48–nation event at Dun Laoghaire Harbour.

In the girls 76–boat fleet, Australian Zoe Thomson was the winner of the girls’ division, eight points ahead of one time leader Caroline Rosmo of Norway. Third was Louise Cervera of France. Sixth was Dun Laoghaire’s Nicole Hemeryck of the National Yacht Club. Howth’s Aoife Hopkins was 11th.