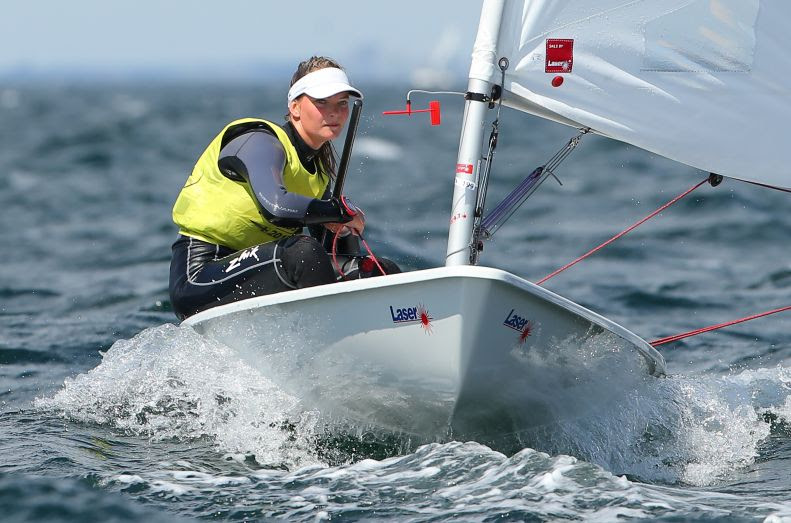 The last day of the Laser 4.7 Youth Worlds once more showed the top level of the young sailors. Dramatic fights and quick changes on the leaderbord heated things up, and some hopes for gold faded away in the very last race.

It was a tremendous fight at the top of the boys’ gold fleet today: Guido Gallinaro, the Italian, finished the first race with a big lead of almost 200 metres, and expanded his lead overall. But Dimitrios Papadimitriou, who finished 11th in the first race, did not give up the fight for the podium. After a perfect start, the Greek controlled the fleet and finished first. Gallinaro started badly, couldn´t free himself from the fleet and finished 40th. When the Italian crossed the line, Papadimitriou was already celebrating his victory, which couldn´t have been tighter: His advantage over the Italian was one point in the end.

Gallinaro, who had considered the gold medal almost safe, showed a grief-stricken face while his arch-rival Papadimitriou sailed back to the harbour in a triumphal procession, the Greek flag attached to his mast. To Gallinaro, history repeated itself: In the European Championship earlier his year, he was also narrowly beaten by the Greek on the last day of the regatta. So it was the Silver medal again for the Italian. The Bronze medal was won by Pere Ponseti from Spain, who showed two fantastic races and climbed up one place on the leader board.

“Guido and I had some interesting battles this year”, said the new World Champion, Dimitrios Papadimitriou, with a radiant smile. “After the first race, I thought that he had beaten me. But when my coach told me that there was still a chance to get to the top, a boost of motivation pushed me in the last race.” Vagelis Chimonas, the coach of the exceptional sailor, said that Papadimitriou stayed cool in every situation. “I have known Dimitrios for two years now, and I will accompany him in the future in Laser Radial, too. We may expect a lot more from him!”

The future of sailing in the Laser 4.7, from a Greek point of view, is Emilios Monos. He won the U16 category, followed by Finn O’ Dea (Australia) und Pep Cazador (Spain).

Emma Savelon was exhausted, but completely overwhelmed when she pulled her Laser ashore. “I haven´t realized yet what happened”, said the new World Champion of the girls´s division. A consistent showing throughout the week saved Savelon´s Gold medal today, as the Russian Mariia Kislukhina won both final races. Emma Savelon finished 7th in the first race, and she knew that she had to do well in the second. But the 16-year-old sailor from Medemblik kept her cool and finished in 7th place again. “This second race was very tough”, said Emma Savelon, “my start was far from perfect, and I was on the wrong side of the course on the first upwind leg. On the downwind I had to work hard to keep going as fast as possible, and had to make the right decisions on the last upwind leg”. The 7th place gave Savelon an advantage of seven points over Kislukhina, who won the Silver medal. The Italian Elisa Navoni won the Bronze Medal in the girls´ division.

Julia Büsselberg from Germany, who had been on the podium on all major Laser 4.7 events for the last two years, sailed two 14th places today and finished eighth overall. “I could have done better”, said Büsselberg, But there were too many days with strong winds that didn´t favour the light sailor from Berlin. Büsselberg said that she was happy for Emma Savelon: “Emma is a very good sailor, but I was not sure if her nerves would prove strong enough to win.”

The U16 division of the girls was won by Wiktoria Lehmann (Poland), who had impressed her competitors with a wire-to-wire-victory yesterday. She was followed by Spain (Ana Moncada) and Great Britain (Matilda Nicholls).

The Kieler Förde again provided outstanding racing conditions today with a steady southerly breeze of 19 to 20 knots. In the afternoon, the wind picked up to 25 knots, so the Principal Race Officer Stephan Giesen decided to cancel the last two races of the Bronze and the Emerald fleet of the boys. The Race Committee, headed by Stephan Giesen and Mandus Freese, were widely praised by competitors and coaches alike. “When we said goodbye via VHF today, a lot of trainers applauded”, said Giesen. The PRO, in return, thanked all competitors for a week of fantastic sailing sports.