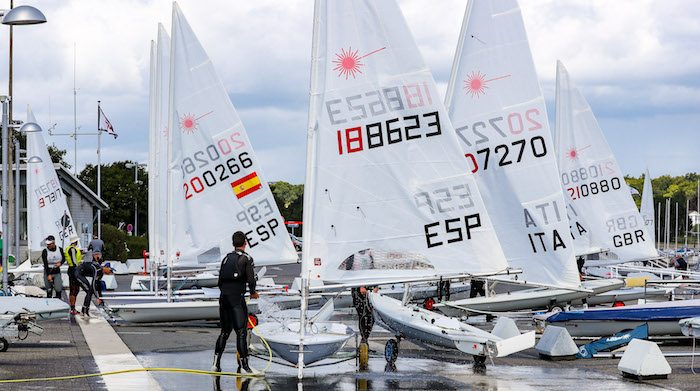 The 2016 Laser Under-21 World Championships in Kiel ended with a day of light, variable winds in the Laser Standard (men) as well as the Laser Radial (women). There was not enough wind on the Kiel fjord to be able to sail more races that would be suitable for a Laser World Championship. So the results remained the same after ten sailed races in both groups: New World Champion (U-21) in the Laser Radial is Monika Mikkola from Finland (Helsinki, 20 years), in the Laser Standard it is Jonatan Vadnai from Hungary (Balatonfuered, 18). 201 participants (144 men and 57 women) from 39 nations and all continents were guests at the Kiel Yacht Club.

Wind from seven up to 31 knots (two to seven beaufort), rain showers at the beginning and sun at the end – Kiel offered all varying weather conditions. Ten races were completed, so two discards were possible (in the men’s fleet of the Laser Standard only one discard from the two races of the two final series races, where 144 sailors were divided into a gold and silver fleet).

Finishing first in his first race of the Championship, Jonatan Vadnai had made clear that he can live up to the expectations of the role as a favourite. During Kiel Week, on the same course area, he finished fourth, demonstrating his ability to compete successfully at this venue. Three further first place finishes followed in the qualifiers, and another one in the final gold fleet. “I am happy. Fortunately, we did not sail anymore today, so nothing could happen to me anymore”, Vadnai was not unhappy about the cancelled race on Tuesday. He had been a bit nervous in the morning and had tried to get distracted by listening to music.

Also finishing first in his first race of the regatta, Joel Rodriguez from Gran Canaria (Spain), the title defender, showed that he could sail again at the top of the fleet. He was also successful in finishing at the head of the fleet three more times in the qualifier races – so it has been a head-to-head race at the top of the fleet. There were only three points between the top two sailors and Rodriguea was hoping for more races to have one last chance to retake the lead. “That is frustrating to be ashore and have no more chance. But that’s reality.”

Nik Aaron Willim (19, Schleswig/Germany) won an unexpected medal with rank three. “Bronze, that is really cool.” He was following his conservative strategy not to take too many risks, and his consistent sailing was successful in the end.

In the Laser Radial Monika Mikkola from Finland (20, Helsinki) also lived up to the expectations of being one of the favourites. From the first day, she took the lead and sailed an impressive series in all conditions, with four first and two second places. A fifth and a sixth place were her worst scores, so that she would not have had to sail the last day to win the title. “No, I had not believed to become World Champion. The girls here are all really fast,” said Mikolla. From Kiel she will go directly to Croatia for the U-21 Europeans. Tokyo 2020 is her defined goal for the future.

With 16 points Mikkola was clearly leading in front of Vasileia Karachaliou from Athens (19, Greece). Karachaliou’s aim to make it like her team colleague in the Laser 4.7 (who had won the title in the Laser with the smaller rig just the week before), did not quite pan out. But she was nevertheless really happy about the silver medal. After a big fight and 32 points, she had no chances for a victory anymore. Maité Carlier (20) from Ostende (Belgium) remained at third from the first until the final day.

Jonatan Vadnai (Hungary) won the Under 19 award in front of Joan Cardona Mendez (Spain) and Jakub Rodziewicz (Poland). In the Laser Radial Mirthe Akkerman (The Netherlands) was recognized as the top Under 19 sailor at this event, followed by Sandra Lulic (Croatia) and Nicoel Hemeryck (Ireland).

“You can rely on the wind in Kiel”, race officer Robert Niemczewski was satisfied with the summary of the event despite the last day. “It was also very difficult for us, since it was unusually gusty and shifty”, added co-race officer Tina Buch. “But we managed to have nice races.” With the very light and shifting winds on the final day in Kiel Schilksee, the race committee did not want to start any more races. Only a puff of wind (three knots) was measured at the windward mark – not enough for a world championship race. At 1pm, the remaining races were called off.

“We had a great variety of conditions”, summed up Randolph Bertin, representing the International Class Association. “It was a challenge for the sailors and we have two, true champions.” Bence Borocz, Head of the International Jury, was also satisfied with the event: “We had only a few protests. That is a good sign. The sailors know the rules”, stated Borocz. At the prize giving ceremony, Dr. Carsten Krage, president of the Kiel Yacht Club, thanked all participants and coaches on the water as well as the team of the race committee. “We had great days of racing. The weather conditions were perfect to find the best Laser U-21 sailors in the world.” Gratitude is also owed to the federal state of Schleswig-Holstein and Helly Hansen for supporting the event.