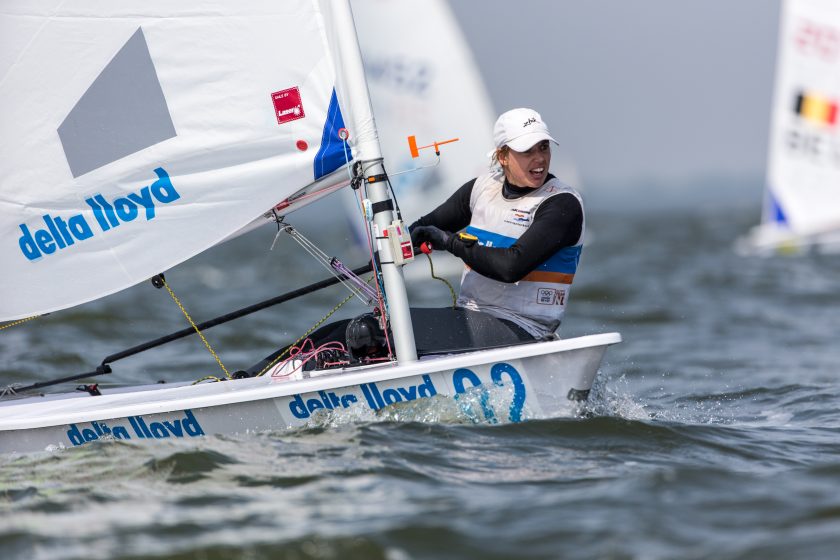 How to Tack a Laser

Tacking a boat means we change tacks by moving the boat through head to wind. This means the tack starts by heading up towards head to wind. As soon as the bow of the boat crosses head to wind the sail will come across. At the same time you need to bring your body from one side to the other. It is not unusual to lose speed during a tack. As the sail has no flow during a part of the tack there is no ‘engine’ and therefore, a loss of speed. To minimize the loss of speed you have to minimize the time with ‘no engine’. The technique is called a roll tack.

To explain the roll tack in a Laser we need to divide the tack in three stages:

Entry of the tack

The entry comes from sailing on a close-hauled course, until the boat is head to wind. The steps you need to take during the entry part are always the same. Only the speed of executing has to be adjusted to the wind strength and sea state. The entry part of the tack, always starts with heading up by pushing away the tiller. On flat water this can be a slow movement, as there are no waves that will stop you. This way you make maximum use of the momentum in the boat. You gain height without losing much speed. On waves you need to time this movement with the waves. To get an extensive explanation have a look at the Marit Bouwmeester Videobox.

Middle part of the tack

The middle part starts as soon as the boat is head to wind. This is a tricky part, as a lot of things need to happen. Try to minimize the time spent in this part of the tack. As soon as the sail starts flapping, you need to speed up the steering, to minimize the time spent in the middle part. The boom will come across and you need to bring your body weight to the other side. The longer you wait to move to the other side, the more the boat will heel during the tack. This means that in light wind you want to wait as long as possible to create a lot of boat heel. More boat heel means more acceleration out of the tack (see exit). In strong wind conditions you don’t want the boat to heel at all. In that case make sure to move to the other tack as soon and quickly as possible! One of the most common problems in this stage of the tack is ducking the boom and moving your bodyweight to the new tack. To make it easier for yourself shift your bodyweight backwards before ducking the boom. This way you can turn your body sideways to the new tack instead of a forward movement.

Exit of the tack

The exit starts as soon as your boat is on the new tack and you have moved your body to the new windward side. Try to be sailing upwind again as soon as possible. The exit part is dictated by the middle part. If you decided to create a lot of boat heel in the middle part, you need to bring the boat flat again in the exit part. In light winds this will give acceleration. Finish the tack by shifting hands. Steering hand becomes mainsheet hand and visa versa.

SportVid is founded by Roelof Bouwmeester and Sietse-Jan Sietzema. Both have many years of experience as sailors at the highest level, coaching talented youth sailors and Olympic athletes, such as Roelof’s sister, Marit Bouwmeester, 2016 Olympic gold medalist in Rio!