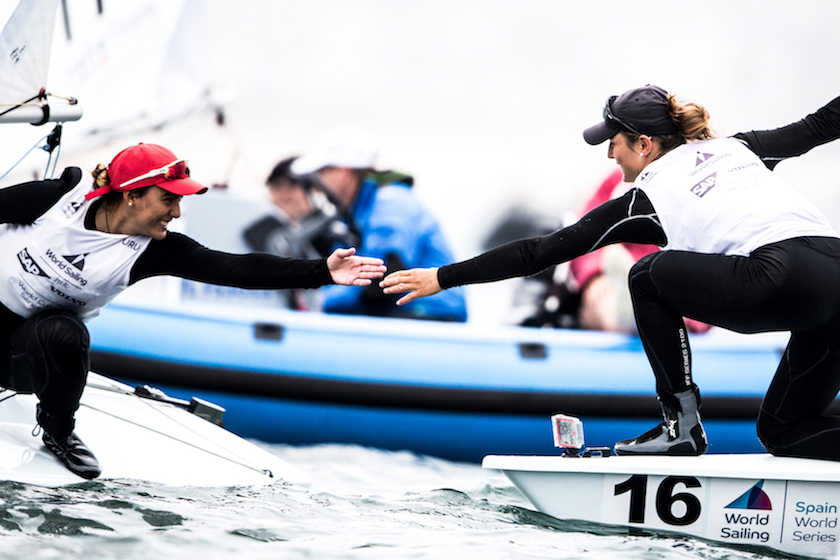 Evi van Acker (BEL) had wrapped up gold in the Women’s One Person Dinghy, Laser Radial, ahead of the final day of racing. The pressure was off the Belgium so the story shifted to the race for the silver and bronze medal.

Moreira put the hammer down at the front of the fleet and streaked ahead in the Medal Race. She held the lead on the final downwind and was in silver medal position but she was penalised for pumping her sail and had to do a penalty turns. She dropped to second, her eventual finishing place, which handed the initiative to Karachaliou.

Karachaliou, winner at the American World Cup Series event, came through in fourth which gave her silver. Moreira had a nervous wait for the pack behind her to follow and with Plasschaert in eighth and Rindom in ninth, she snapped up bronze.

The Greek sailor had the biggest smile on the water after racing and commented, “It was a crazy day, I went into the competition to enjoy sailing and it was not easy at all. It was stressful and I did my best to remain calm and tried to make the least mistakes possible. It was difficult with the wind and currents in the bay.

“We have had sun, wind and the good atmosphere. We had good races and on time. I have enjoyed it.” The Laser, Men’s One Person Dinghy, Medal Race was the epitome of snakes and ladders, thanks in part to a large number of penalties applied due to sailors pumping their sail. The lead changed regularly in the race and it was a tense fight for the medals.

Bernaz looked relieved ashore after racing, commenting, “It was really tough today as I had a bad start. Luckily, I had enough points to retain my first so it was nice week.”