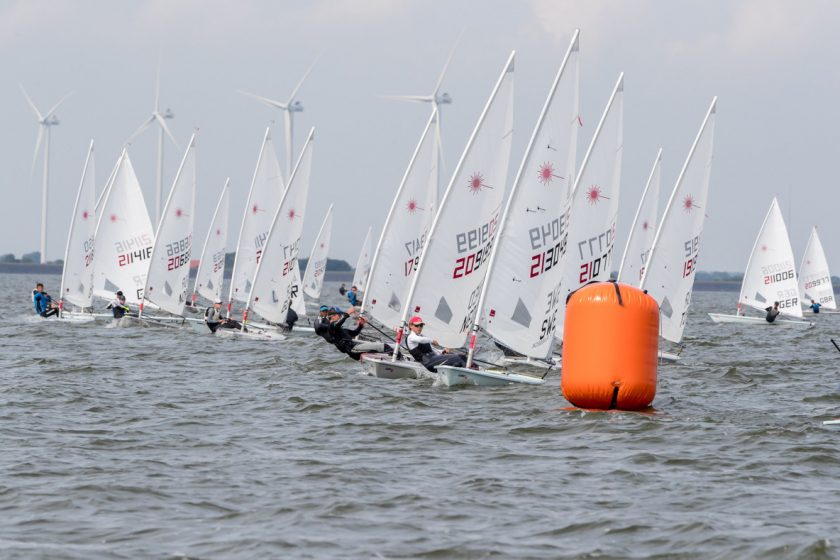 (Medemblik, Netherlands) – Three races were completed today in each fleet, concluding the qualifying series for the 2017 Laser Radial Youth World Championships in Holland.

Breeze on the IJsselmeer hovered around 5 knots this morning before steadily building to 12 knots in the afternoon. Racing under sunny skies and warm temperatures was a welcomed change after yesterday’s rain and lack of wind. With about 20 degree oscillations, there were more general recalls and black flag starts, but surprisingly no black flag disqualifications were earned in any of the six fleets. With the big wind shifts, the sailors who managed to stay in phase quickly established their place at the top of the fleet. One sailor who got it right, Guido Gallinaro from Italy. After dropping a 14th place on day one, Gallinaro has since drawn up a picket fence of first place finishes on the scoreboard to claim a 16-point lead. Matias Dietrich from Argentina had his lowest finish in the last race today, a 24th place, but is holding onto second place overall with his previous consistent finishes. Switzerland’s Gregoire Peverelli, however, is only one point behind in third after keeping a first and a second place finish in the green fleet today.

In the girls’ division, Germany now claims the first two positions overall. Julia Buesselberg still sits in first place, Hannah Anderssohn just one point behind after she secured all top-5 finishes today. Uruguay’s Dolores Moreira Fraschini, who competed in the 2016 Rio Olympics at age 17, has climbed into third place and now sits only 4 points out of first overall. All three girls each won a race in the purple fleet today, showing the tight competition that surfaced on Day 4 of the championship.