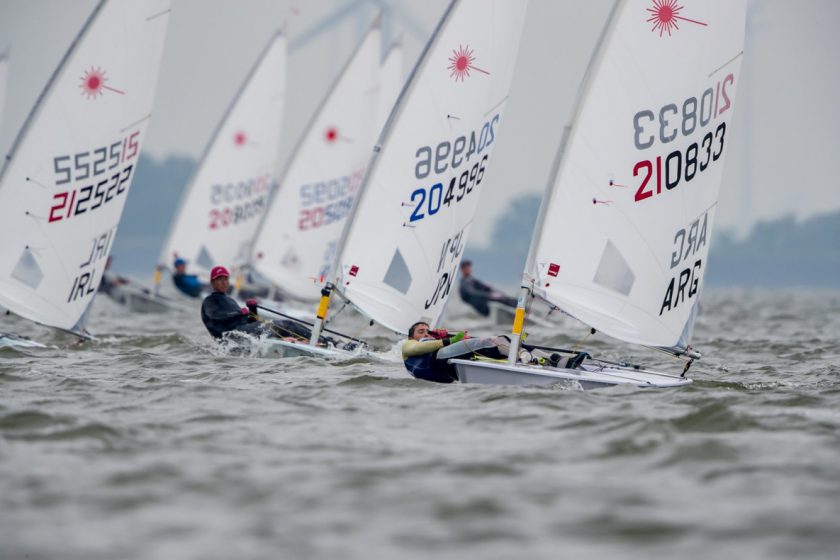 (Medemblik, Netherlands) – Today brought the first round of the Final Series at the Laser Radial Youth World Championships. The fleets were divided into Gold and Silver fleets, with additional Bronze and Emerald fleets for the boys.

Under gray skies and rain, the breeze built from 10 knots for the first race up around 15 knots for the second – the heaviest wind seen at the event thus far. Some new faces started leading the fleets today with the change of conditions, with the advantage now shifting to the bigger sailors after three days of light air racing. The overnight leaders struggled a bit in the challenging conditions, mixing up the competition for tomorrow’s final races. On the Alpha Course, both Guido Gallinaro of Italy and Matias Dietrich from Argentina, who held first and second place respectively at the start of the day, had poor showings in today’s first race with Gallinaro finishing 34th and Dietrich in 28th. Spain’s Marcelo Cairo found the fresh breeze to his liking and sailed away from the fleet to a convincing win. Second place went to Nicholas Bezy from Hong Kong and Dimitris Papadimitriou from Greece finished third.

In the day’s second race, Argentina’s Dietrich again found himself at the top, leading the fleet by an easy 100 meters at the first weather mark. In beautiful surfing conditions in a short chop, Japan’s Yoshihiro Suzuki showed excellent downwind speed to overtake Dietrich by the first leeward gate. From there, the race turned into a match race as Dietrich and Suzuki traded tacks upwind and battled side-by-side on the downwind legs. In the end Suzuki was able to open a small lead on the bottom reach and hold off Dietrich for the win. Marcelo Cairo managed a nice comeback to close the gap on the leaders and round out the top-three. After two races today, Dietrich now leads the boys’ Gold Fleet, two points ahead of Suzuki. Gallinaro hangs on for third overall after two finished in the 30s today. On the Bravo Course, Julia Buesselberg of Germany, the girls overnight leader, dropped to third place overall today with her finishes of 44th and 17th. The most notable performance was from USA’s Charlotte Rose who has risen from 8th to 4th place overall. In the first race of the day, Rose quickly shot out on the first beat, leading the pack by a comfortable distance. Uruguay’s Dolores Moreira Fraschini gained on the downwind and managed to pass Rose, but Rose quickly fought her way back to first and secured her win. In the second race, Rose was at the top again, but this time chasing Hannah Anderssohn of Germany, and the two were quickly separated from the fleet behind them. Anderssohn, finishing with an 8th and 1st today, moves into first place overall with Fraschini only 3 points behind.