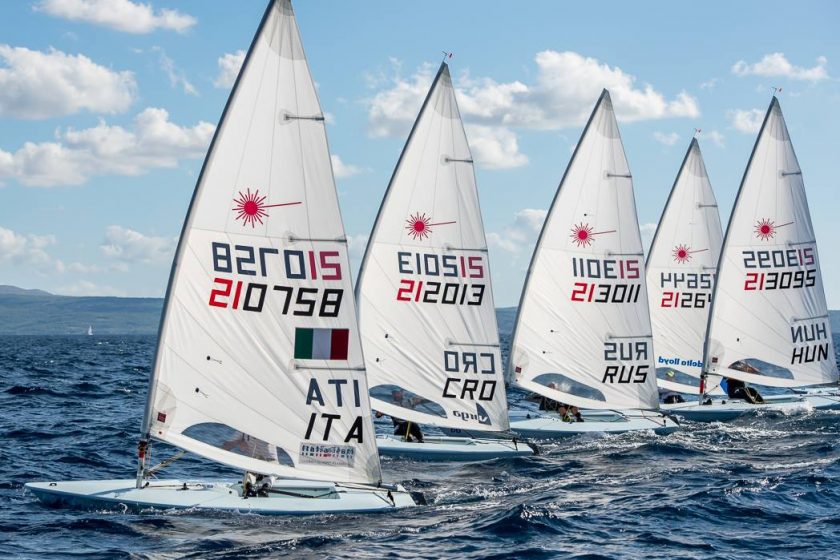 (Split, Croatia) The single race held at the end of the second day, after a delayed start, was worth waiting for. The race committee expected light wind today and last night postponed the scheduled start by 2 hours. On arrival at the boat park a further 3-hour postponement was needed as the gradient wind was completely neutralized by a feeble sea breeze thermal wind. The local weather experts predicted a good wind late in the afternoon, and at 15:00 their optimism was rewarded with a 10 to 12 knot gradient wind re-established from the south east.

By 16:30 the Yellow Fleet was started first after a general recall. Series leader and 2012 Olympic silver medalist, Pavlos Kontides from Cyprus, protected the pin end and had plenty of room to power off to the favored shore side of the course. About the race Kontides said, “Soon after the start I tacked to starboard to partly cover the fleet and I lost some advantage. I tacked back to the shore and regained the lead by the first mark. After that I worked on extending my lead without taking any risk.” The victory marked the third consecutive win for Kontides and doubled his overall lead on second place and left him as the only person in the top ten who did not change his overall place. In all there were 4 downward and 5 upward movements from 2nd to 10th place but with only 14 points covering these places there will certainly be more changes in the next nine scheduled races.

In the Blue Fleet there were two general recalls before a clean start. Australia’s Matthew Wearn was first around the weather mark and held his lead throughout in spite of a scare at the 2nd upwind mark when Jesper Stalheim or Sweden nearly got in front after a great second beat. Wearn accelerated away downwind to a clear win ahead of Andrew Mckenzie from New Zealand as Stalheinm slipped to fourth.

The Red Fleet started first time in a close start that saw two boats break the start line early. This race saw Olympic bronze medalist, Sam Meech from New Zealand in a close battle with British sailor Elliot Hanson for the top two positions. On the second windward leg Hanson took a shift that Meech missed and put enough space between them to hold on to win comfortably.

At the moment, the fight is to get into the gold fleet which will be decided tomorrow (Saturday) with 3 races scheduled and a forecast of 20 knot winds.