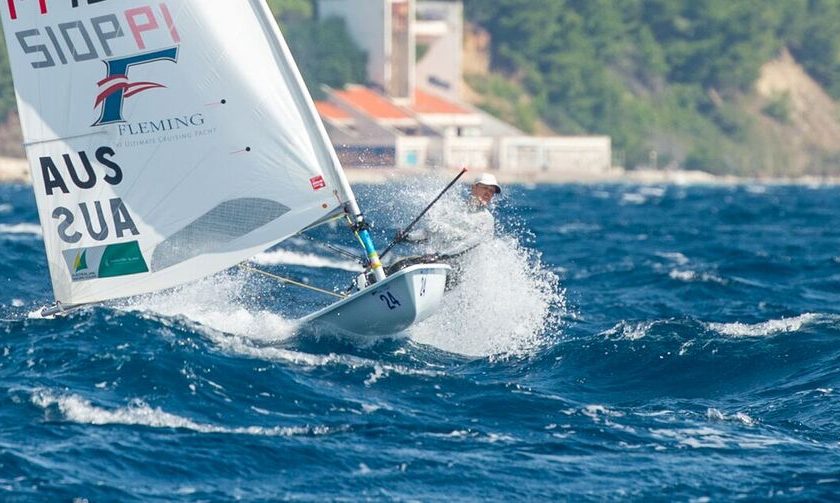 (Split, Croatia) – The final day of qualifiers in Split delivered the promised 20-knot southeasterly wind, gusting up to 27 knots and giving great surfing conditions downwind with a tough workout upwind. If there were any doubts that Laser sailing is not athletic, they were quelled today watching the world’s best battle of skill in three back-to-back races.

On the reaches, boat speed touched 15 knots in the gusts. Downwind, there were many sleigh rides on the steep waves, including some unintended rail riding. Throughout each race places were gained and lost on each leg, adding to the excitement. Defending champion Nick Thompson GBR scored his best result so far with a third in the first race of the red fleet, sailing the inner loop, followed by his first bullet of the series.  He said, “It was hard work but good fun. The current was not so relevant today, which gave a more open course. Unfortunately, I broke my tiller in the third race and that became my discard. We are still only at the halfway stage so I am pleased that I have started to move upwards. I am only 13 points behind Pavlos Kontides from Cyprus in first place, which is not a large margin over 6 races, especially in the super competitive Gold fleet.”

In the yellow fleet, Kontides scored the same 3, 1 score as Thompson and coincidently suffered gear damage at the start of his third race. This leaves him and Thompson as the only sailors with a big discard.

The best score of the day went to Jean-Baptiste Bernaz from France with a 1, 2, 1 in the red fleet. The 2016 World Championship silver medalist is once again sailing a consistent series in all conditions, going into the final 6 races with only one score that is not a second or first.

Olympic Gold medalist, Tom Burton AUS, sailing in the blue fleet, helped himself to 2 wins leading from start to finish in his last races of the day, after a reasonable 7th in the first race. His results also lifted 11 places up to 6th.

Sunday’s start has been postponed until 13:00 due to a predicted low pressure system, causing a 180-degree change in the wind and probably a change in the course area.