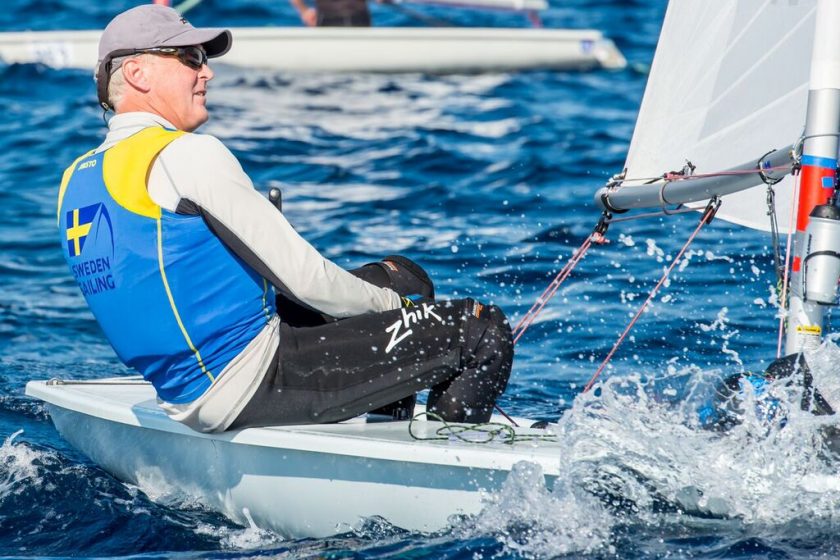 (Split, Croatia) – After two days of delay, waiting for wind and shopping for the best forecast app, racing finally got underway at the Laser Masters World Championships in Split. Long standing battles continue and newcomers seek to take over past heroes.

The 350-strong fleet, divided evenly between the Laser Standard and Laser Radial, went afloat mid-morning on the tail end of a northerly Bora wind. The sailors patiently waited for the forecasted 6 to 7 knot south westerly wind to arrive at 14:00. Both fleets sailed on different courses and were further divided into groups of 10 years, starting from 35 years +10 through to 75 years +. These sailors are affectionately known as the “Legends,” sailing only in the Laser Radial Great Grand Masters (65+) fleet.

Both courses set off racing at about the same time as the wind built to 10 knots by 15:00. The breeze peaked at 16:00 with 12 knots, before it started to die away by 17:00, causing several of the races to be shortened.

The Laser Radial Great Grand Masters fleet exemplified sailing as a “Sport for Life” today. Among the 62 sailors in this fleet are 17 “Legends,” including Deidre Webster from Canada. In the front end of the fleet, Legend Kerry Waraker from Australia is sitting in second, behind fellow countryman Rob Lowndes.

In the Laser Standard Master fleet, Australian Brett Bayer is still at the top of his game in the 69-competitor group, with a 1-point lead over Peter Hurley and Ernesto Rodrigues both from USA. The Grand Master Canadians Allan Clarke and Andy Roy sandwich second place held by Tomas Nordqvist from Sweden.

Racing is scheduled for the reserve day on Wednesday, due to the four lost races from the first two days of the Championships. A late afternoon breeze is forecasted.