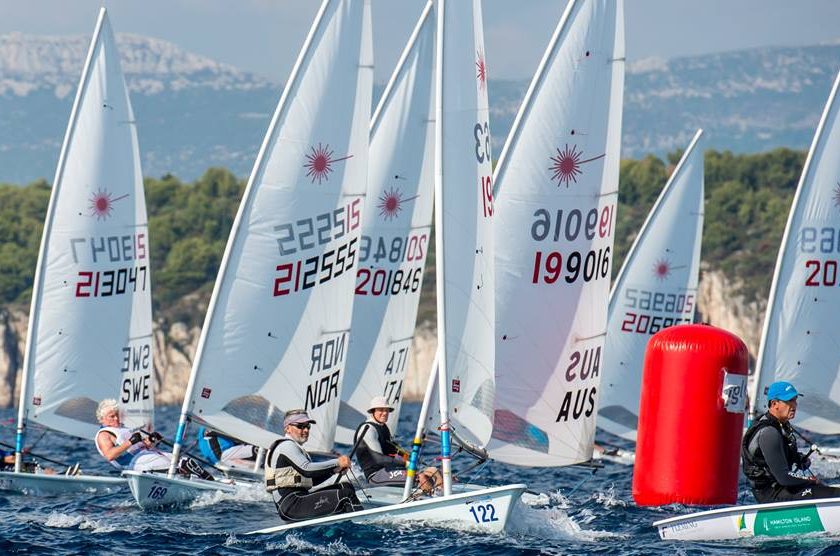 (Split, Croatia) – The competitors from 35 countries at the Laser Masters World Championships were again held on shore to wait for the wind. At midday, the Standard Masters, sailing on the offshore course, were sent afloat forty minutes ahead of the Radial Masters, who sailed on the inshore course. By 14:00, both fleets were started  in a 7 to 10 knot south westerly wind, which held until 17:30 and allowed two more races to be completed in all fleets. The overall scores could then be calculated with drop race, after reaching the four-race minimum.

In the three Radial fleets, the effect of a dropped race had the biggest impact. Rudi Ratsep USA, the overnight leader of the 62-strong Grand Masters division (55 to 64 Years), slipped to fifth overall after scoring two double figure finishes. This pushed Martin White AUS to fill the number one spot. Pierantonio Massotto ITA jumped four places to second, after scoring a second and fourth place.

In the Standard fleets, Apprentice (35 to 44 years), Master (45 to 54 years), Great Grand Master (65 + years) Maciej Grabowski POL, Brett Bayer AUS and Frank Bethwaite AUS all maintained their respective overall leads. Grand Master (55 to 64 years) Allan Clarke from Vancouver, also defended his lead against his fellow countryman Andy Roy from Ontario in an interesting East versus West Canadian battle, after each won a race.