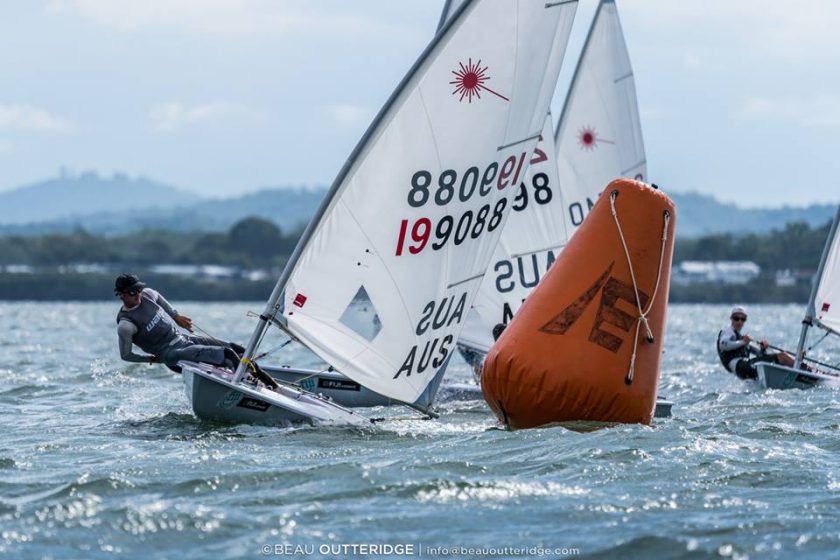 The Oceania & Australian Open Laser Championships run from Royal Queensland Yacht Squadron at Manly concluded on January 4th. Eleven of the scheduled 12 races were completed, after one full day of racing was lost due to light and variable winds.

In the 75-boat Radial fleet, Zac Littlewood AUS won six of the eleven races for a 6-point win over New Zealander Josh Armit. Josh is the current World U-17 Laser Champion and was 4th in the Laser Radial Youth Worlds in Medemblik, Netherlands. Yoshihiro Suzuki from Japan was third.

Michael Compton AUS was a comfortable winner in the 4.7′s with five race wins. Wonn Kye Lee from Singapore was the runner up ahead of Boston Cortis AUS. With a record 62 4.7′s entered in the event, competition was fierce.

As expected, Australians Matt Wearn and Tom Burton were in close company, both around the race track and on the scoreboard in the Standards. Each won four races, however, Wearn finished up just three points ahead of Burton after the eleven races. Mitchell Kennedy AUS had two wins and consistent places to finish a clear third.

See full results for the 4.7′s and Standards HERE and the Radials HERE . The event web site is HERE.