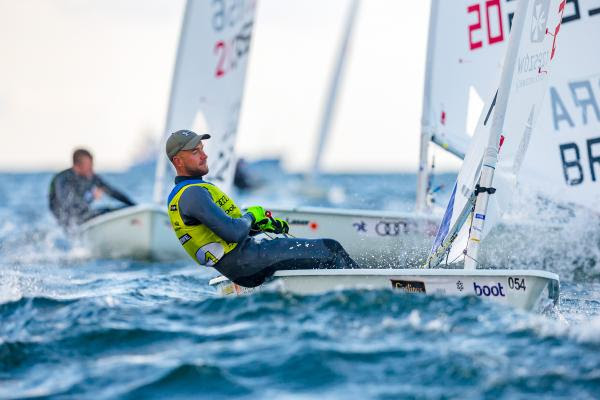 The yellow fleet sailed to the race area and managed to get under way for their first race of the day, but had to abandon: due to a gathering storm front, the race committee sent the Laser Radial Men back to shore. Leading after day one, Aleksander Arian (Poland) was a little disappointed, but understood. “On the race course, the winds were of medium strength, but with many gusts.” And since they could already see the coming storm front, the decision was a good one, he said. “Safety first.“

But the racing was only delayed, and not cancelled. At 17:30 they started off again, with Arian using the opportunity to bring home another victory in the first race of the afternoon. “It was a great start yesterday”, referring to his third and first place finish to open the regatta. The sailor from Poland is hoping for strong winds for the next days. “I am good in strong winds.” But no matter what the conditions will be, he is having fun. At 25 years, he is actually one of the older athletes in the fleet.

New Zealand’s Josh Armit won the second race of the day in the blue fleet, and is tied with three other sailors at 5 points each. Quite a few of the sailors in the fleet sailed too far to the right, expecting to find the mark in that area. When they realized their mistake, Josh was already at the mark leading the fleet. Josh Armit, now in second place after after winning a race in each of the first two days, is one of the younger sailors in the competition. “I’m happy to be here,” said the 16-year-old. In New Zealand, the fleets are not as big, so he enjoys being on the water with so many boats and competing against them. He has not set a specific goal: “I just sail and do what I can,” day after day and each race, looking for what is feasible.

This is also the motto of Zac Littlewood (Australia), coming into the day at fourth overall, but scoring a second place behind Aleksander Arian in the opening race and then moving into the lead with a first to close out Day 2. He uses the summery conditions in Europe, not only to escape the winter in his country, but also to prepare for his season highlight, the Youth Sailing World Championships in Corpus Christi (USA) at the end of July. The 17-year-old likes the windy conditions he is encountering at Kiel. “These are always good races.” However, he sees himself as an all-rounder and takes the wind as it comes. The fact that the racing was broken off with the “unpredictable winds” was the right decision, he thought.

Another young Australian sailor who has been at the front of the fleet and is only one point off the lead (having finished in the top two each race so far) is the 18 year old Caelin Winchcombe.

Still, it is not only the young sailors having their way. Returning World Champion Marcin Rudawski, at 36, is in fifth place overall and continues to demonstrate his abilities in the Radial class, finishing in the top five in each of the first four qualifying races.

Tomorrow, sailors will split into Gold and Silver fleets.