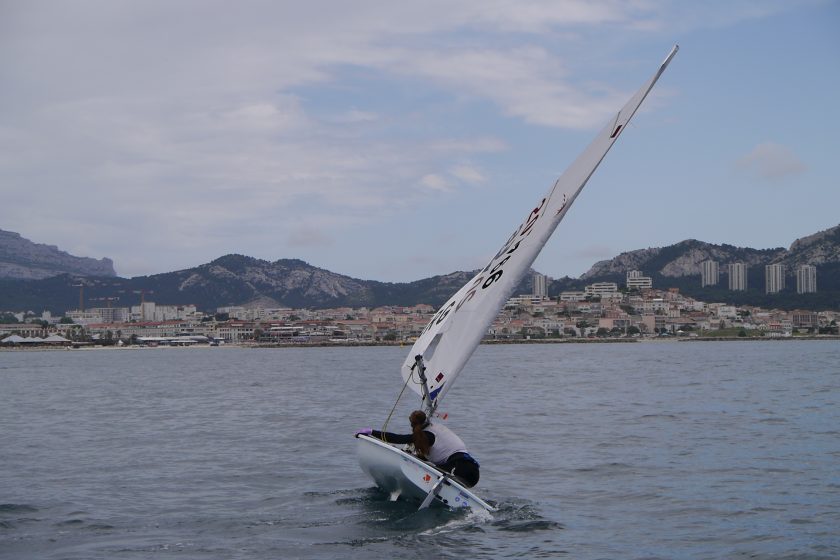 Downwind, there are fewer shifts than upwind because we are sailing away from the wind (not towards it). Still every shift counts and sailing the optimum angle to the wind and waves is crucial to get downwind as fast as possible. Sometimes it is not always obvious why one way works best, for example, port broad reaching and lots of downturns, or starboard by the lee and lots of upturns, but there is always a best way.

Gybing may be done for several reasons:

Now, there are many different types of gybe: Run to Beat, Run to Run, Reach to Reach, Reach to Run, and so the list goes on. So, we are going to deal with best-practice principles:

Begin with the end in mind.

You need to exit the gybe at as close to full speed as possible, in the desired direction of the next leg of the course. So, we may need to consider wide entry for a “tight exit” or adjusting some sail controls before gybing, if possible.

We want to be making as much progress as possible during the gybe. This means, for example, gybing on the wave, so we continue to surf while gybing. We need to consider the big picture. If the aim is to make progress directly downwind, we don’t want to turn through a huge angle to gain extra speed if our overall “velocity-made-good” to the next mark would decrease by doing this!

This is true for all boat handling, but the more effort you put in (assuming it is done at the correct time, correct place, and in the correct way!), the better. So, the order is: body, sheet, steer. If, for example, you simply did all of the turn with the rudder, it is much slower than using roll.

When we think about gybing Lasers, unfortunately, the first thought is about the mainsheet getting caught around the transom. This is so easily avoided: simply keep the sheet tight (no slack) and it cannot be caught. This is achieved by rapidly pulling in the sheet just as the boat gybes.

NOTE: Do not be tempted to flick the sheet, as this can occasionally cause the sheet to loop over the end of the boom, which is often worse than being caught around the back!

Standard Gybe: easy to do a big roll Sheet-around-the-back Gybe: easy to steer through a smaller angle