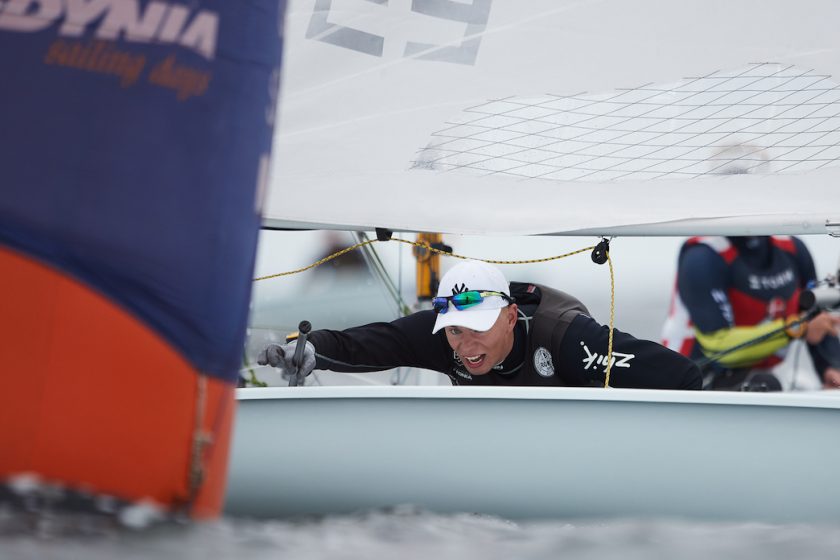 Sailors were greeted this morning by 8 to 12 knots of wind under a low, grey sky and everything running smoothly on schedule. Boats were rigged and launched with sailors making their way to the course area under a comfortable reach.

For some competitors, pre-race nerves were already beginning to ebb as they sailed around the starting area checking the wind direction and checking it again, working down the line and sizing up the conditions. Others were perhaps becoming even more anxious as the first start loomed.

For the Standard Men’s yellow fleet, a flood of boats over the pin end of the start line 5 seconds before the final signal meant a general recall and going through the whole process again, this time under black flag, which was effective in keeping the sailors from being overly aggressive: only one sailor was over early this time, not the start of the Championship he was looking for.

The Men’s blue fleet managed to start the first time under Uniform flag, again with one boat over early. The Radial Women’s fleet also managed to get under way on their first start, but did have half a dozen sailors recorded for being on the course side of the start and receiving a UFD.

With no obvious advantages appearing on port or starboard, all the fleets seemed to use the whole course with some sailors favoring the left side and others heading right on the first beat to windward.

In the second race of the day for all fleets, it seems that there were some early oscillating shifts to the left, often inducing a good number of sailors to switch to port tack, trying to make some gains as they threaded their way through the starboard tackers, some of whom may have been looking for a more permanent shift to the east.

In short, each fleet got in two good races and the final results can tell you who had a good day and who might not be so happy, showing a combination of surprises as well as some expected results. In the Radial Women’s Fleet, Mara Stransky (Australia) should be feeling good about her performance as she won both races. Only two other sailors managed to finish in the top 10 in both races on the day: Carolina Albano of Italy and Norway’s Caroline Rosmo. In the two Men’s fleets, results were mixed with three sailors tied at the top of the standings at 5 points each: Berkay Abay (Turkey), Daniel Whitely (Great Britain), Ethan McAullay (Australia) and quite a few more sailors bunched up close behind. A handful of competitors had a top ten finish combined with another between 15 and 30: not quite satisfying but not a disaster either. So, tomorrow is an opportunity for redemption. We’ll see who takes advantage.