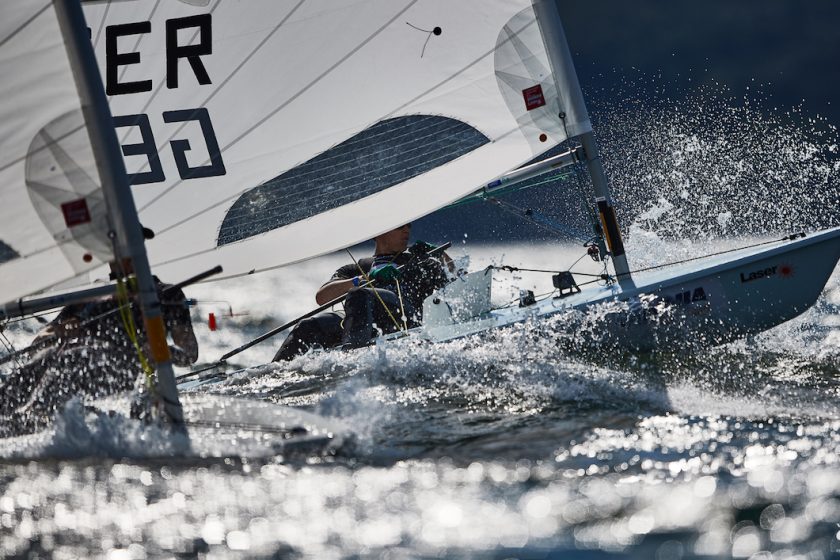 There were very few smiling faces coming off the water today. It was late, and even if it wasn’t as physically demanding as it had been the day before, it seemed to be much more mentally challenging. “It was snakes and ladders out there,” remarked one sailor. “I never could figure out what was coming next,” said another. “Yesterday I felt pretty good, but today, not so much.” Such was the prevailing mood among both Radial and Standard sailors. Or worse.  Daniel Whitely calmly expressed his frustration, “It was a bad day.” And that might be understating things a bit, as his time on the water was marred by a mid fleet finish in the first race only to be followed by his outhaul breaking, leaving him unable to finish the second race. For someone looking for a podium spot, and coming into the day tied at the top of the standings, that is the kind of day that will be difficult to overcome. “Only one drop score in this Championship, right?” he asked. Yes, only one score can be dropped. Such is sailing. And many of those racing might need to be more conservative, both at the start, and from a rule 42 perspective as 26 yellow flags were leveled at the sailors today. A relative handful of competitors had a fine day on the water: in the Radial fleet, Australian sailors Zoe Thomson (finishing with a second and a first) and Elyse Ainsworth (first and sixth) didn’t have much to complain about. Neither did Anna Munch of Denmark, who scored 3 and 2 in her two races today. In the Standard fleet, Philipp Loewe (Germany) finished 2nd and 1st and now sits at the top of the standings. Arthur Guillonneau (France) had a fourth place finish and then a second, moving him from mid fleet (after a rough day yesterday) up into the top 20. Thailand sailor Chusitt Punjamala has been pretty consistent, adding a 9 and 7 to his previous scores of 12 and 4 to work into the top five. While Kirill Evfimevskii from the Russian Federation was another competitor who sailed well on the day with two top 10 finishes. Race Committee also had their hands full, they were having to deal with the same unpredictable windshifts as the sailors, only they couldn’t just tack out of a header. They had to postpone a number of starts to adjust the line and course, as well as bring back almost every fleet start under general recall (did any fleet manage to get away under “uniform” flag today?). Then there was the large barge that drove through the blue fleet not once, but twice, giving Race Officer Michał Jodłowski more than sufficient cause to abandon and resail the race. But to add insult to injury, a protest was launched against the race committee for one of the Yellow Fleet races as ALL the sailors sailed the wrong course after a course change [Correction: The protest was against other sailors for sailing the wrong course, and the PRO was being called in as a witness in the hearing]. The Jury was meeting late into the evening (still in discussion approaching 11 pm), and no decision had been made as of press time. So, the provisional results are perhaps more provisional than usual. All this was on top of a several hour delay to start the morning while Race Committee waited for the wind to fill in. As a couple of British sailors pointed out, “At least we got to wait on shore!” That may have been the high point of the day for a number of the competitors. But, tomorrow is another day for redemption.