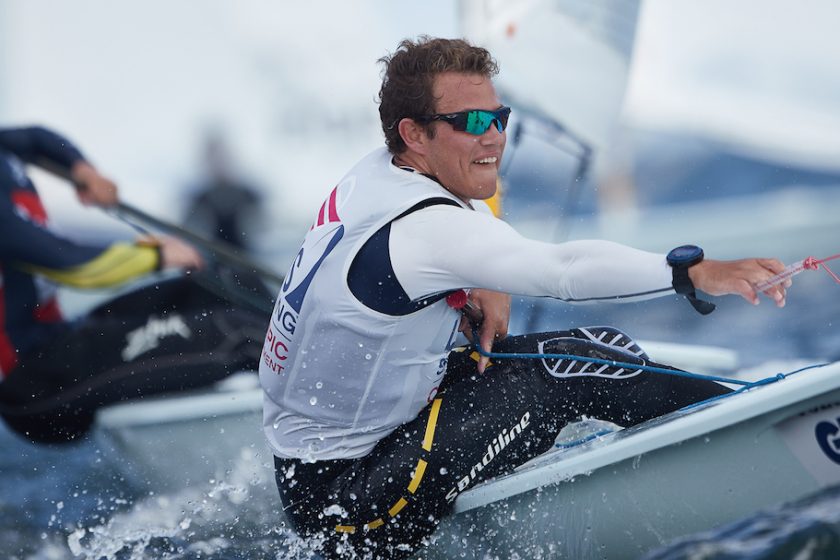 The wind direction on day three seemed just as unpredictable as the day before, but somehow it didn’t feel quite so frustrating. Perhaps the sailors are starting to settle in. Race Committee also had a solid day with minimal problems.

On this last day of the qualification series for the Standard men’s division, the sailors were not so aggressive as the previous two days (with only a few UFDs on the afternoon). As expected, sailors are faced with the need to be a little more conservative with only one dropped score and most competitors already having at least one fairly unsatisfying finish, and often more. The first start for yellow fleet under a shifting breeze had most sailors bunched up at the committee boat. But in the final minute before the start, a left shift drew alert sailors down the line. Unfortunately, a group in the middle of the line punched out over the start early forcing a general recall. After that it was a clean start. The blue fleet even managed to get away under Uniform flag, though a couple of sailors were caught on the course side for a UFD. The women, on the other hand, were a bit more aggressive in their first start of the day, with many sailors over the line early, leading to a general recall and then 8 sailors becoming disqualified under a black flag in the second attempt at starting, which also ended in a general recall. That was followed by two more sailors being disqualified in the restart, again under black flag. That is almost fifteen percent of the fleet knocked out by the time the first race was under way. On their second upwind leg on the inner course, there was a big right shift, giving alert sailors a nice advantage in either extending their lead or picking up some extra places.

The first race was sailed in about 7 to 10 knots, but the wind started to pick up a bit, providing a nice breeze in the 12 to 15 knot range with a few stronger gusts during much of the second race.

In the Yellow fleet with five seconds to go in the start sequence of the second race, again the middle of the line, rather than sagging as often happens, poured over the start-line forcing a general recall. And again, just as in the first race, the second start attempt under black flag was all clear.

The blue fleet, too, had an oddly similar repeat of their first race, again showing a little more caution and getting on the course in one try under Uniform flag with only one or two sailors over early. In the day’s final race, the Radial fleet was aggressive enough to force one general recall, but managed a clear start the second time. Only a minute or two into the race, almost the whole fleet tacked to port for a brief period as they made their way up to the windward mark, apparently a shift everyone picked up.

All things considered, it was a much smoother day, at least from the race management side, with two good races under moderately variable conditions. For sailors, there were plenty of opportunities to take advantage of the shifting breeze. You can get an idea who managed to do so by checking the final results on the day. Caelin Winchcombe (Australia), won his first race of the day. “I had pretty good downwind speed. But also you have to be a bit lucky at times.” It wasn’t a perfect day (15th in the second race), he noted, “but I’ll take it. It’s really difficult to be consistently good here with the wind being so shifty. You can finish in the top 10 one race and get knocked back to mid fleet in the next one.”

Overall leader Philipp Loewe had yet another solid day with two more top ten finishes (4 and 7). “For me it was about the upwind legs. You could find yourself quickly moving from the front of the fleet toward the back pretty quickly. But getting the next shift correct could move you right back up near the front.” We are only halfway through the schedule, so anything could happen, but right now Loewe has been amazingly consistent, finishing no worse than 7th so far, in conditions which have been exceedingly difficult to achieve such consistency.

Two more sailors who have been pretty consistent so far, have been Poland’s Jakub Rodziewicz and Liam Glynn of Ireland. Liam won his final race of the afternoon, following a six in the first race, moving him up to 3rd in the overall standings. “Local” sailor Jakub Rodziewicz (Warszawa, Poland) has finished in the top 10 all but once, including a third place on his final race of the afternoon.

Three Standard sailors from USA, Henry Marshall and brothers Ford and Marshall McCann have had some great races, with each finishing first or second once or twice. But they haven’t managed the same consistency as they might need to win the title. Ford McCann is sitting at 11th overall, but is still within distance of a podium finish. Indeed, all three are, given how variable the results have been. But it is going to take consistently good results to make it happen.

Alexandre Boite of France, the 4.7 Youth World Champion in 2014, continues to avoid major mistakes and has moved up to sixth overall, tied on points with Hungarian sailor Jonatan Vadnai who fell back from second after a perhaps disappointing day, finishing 14 and 15.

In the Radial fleet, Mara Stransky bounced back from a rough day yesterday, finishing second and sixth. “It was about getting a good start and having the freedom to make the decisions you want about where you want to go.” Of course, you had to make the right decisions! Mara is one of three Australian sailors who have been making good decision for the first half of the regatta as she sits just behind Zoe Thomson and Elyse Ainsworth in the standings.

Overall leader among the women is Anna Munch (Denmark), she is the only sailor in the top five at the moment who has not won a race. But you don’t need to win a race to win a series. It is much more important to avoid a bad race, and Anna has only finished outside the top six in one race, which is currently her dropped score.

Carolina Albano (Italy) won her first race of the Championship to close out the day and holds on to fifth place in the standings. Annabelle Rennie-Younger had been having a difficult regatta so far, with lots of mid fleet finishes. “It has been a difficult venue for sure” in terms of figuring out how to read the wind. But, “today was the first day I was leading a race and… I ended up getting a second yellow flag! That really made for a LONG sail back to the harbor.”

Lola Moreira from Uruguay sits just outside the top 10, picking up a 16 and a 10 this afternoon. “It was not a great day today. At one point I was leading the race, but I lost a few boats upwind, and then lost several more downwind. Usually I have good downwind speed and had managed to pass some boats the first time around, so it was frustrating to keep getting passed like that and I couldn’t quite figure out what was happening. So, I’m not at all satisfied.” When asked if she would be satisfied finishing first, “there is always something to improve upon!” she responded. Hopefully tomorrow will be better.

So far, in the Radial fleet, no one is dominating the series, and quite a few different sailors have the potential to put together a solid string of races to become the Under-21 World Champion.

Indeed, both titles still remain wide open. There is not going to be much room for mistakes  over the next several days, however.