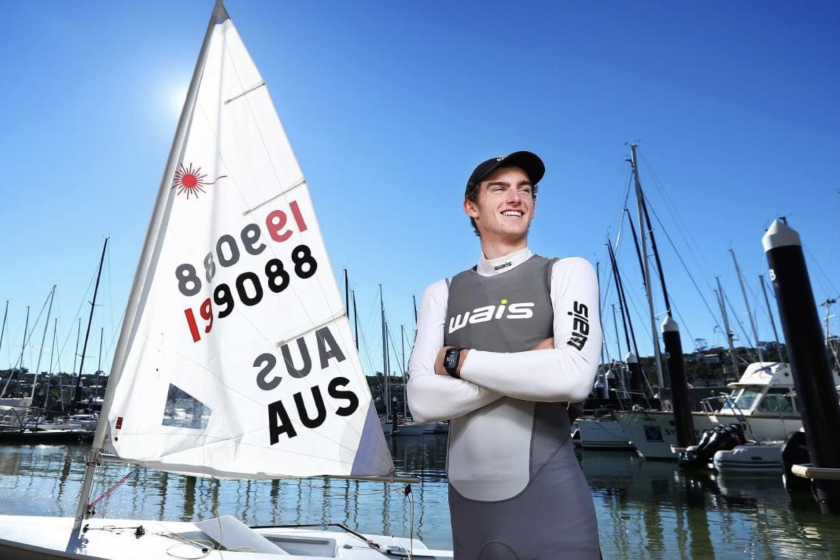 By Associate Editor Nick Tabakoff, via The Australian on July 10, 2018

What made the feat even more unusual is that it was driven — literally and figuratively — by his grandmother.

Littlewood is already being touted as the next star in Australia’s seemingly endless sailing production line that has produced six gold medals at the past three Olympic Games. Australia also has a huge pedigree in the Laser class for sailing, having won the past two Olympic gold medals in that category.

But Littlewood humbly concedes none of his monumental achievements of the past fortnight — in which he beat sailors up to three times his age — would have been possible without his grandmother and constant companion, pensioner Anne Littlewood, 71.

“My grandmother’s my inspiration,” said Zac. “I have a single mother and she works all the time, so it’s my grandmother who supports my sailing, both financially and logistically. I have training at 7am and 3pm, and she drives me around seven days a week. I definitely could not do it without her. She’s been the driver since I was eight years old. She brought me down to the local club, Fremantle Sailing Club, and I’ve loved it ever since.”

Ms. Littlewood said her newly famous grandson was anything but the stereotype of a traditional yachtie.

“Yachting has a reputation for being a millionaires’ sport, but we’re from a modest background,” she confides. “I put every cent I can into it, and we’re fortunate enough to gain some grants. Without them, we couldn’t do it, and frankly, without any further external help, I’m not sure how much further we can go, because I’ve spent pretty much all of my funds.”

But his key mentor, Australia’s high-profile 2000 Olympics gold medallist and WA Institute of Sport head sailing coach Belinda Stowell, said Australian Sailing would do everything it could to keep him in the fold.

“Australian Sailing needs results to get funding, and his result at the World Championships stands him in good stead,” she said. “If you’re a World Champion, you’re strongly in the system, and it does open doors. The WA sailing community bands together.”

Stowell said her job now was to keep his feet on the ground and “keep him progressing.”

What makes the achievement even more remarkable is that Littlewood was out of action for much of this year. Concussion from a freak accident kept him off the water until a couple of weeks before the World Championships.

“Basically, his schoolwork and sailing was disrupted from mid-February until early-June, just before the World Championships,” his grandmother said. “He had no expectations, but was using it as a warm-up to the Youth World Championships in Texas this month. But he just started incredibly well, and kept it going to the end.”

Littlewood is not getting ahead of himself despite his monumental achievement two weeks ago. The obvious next goal is the Olympics, but he refuses to put a date on when that might happen. Australia already has Tom Burton, the reigning Olympic champion, in the Laser class, who is the frontrunner to represent Australia in Tokyo.

“The long-term goal is the Olympics,” he said. “The ultimate aim is to represent Australia, and get a gold medal at the Olympics. I just don’t want to put a year on it. We have to just trust the process.”

Littlewood’s motto is: “Quitters never win; winners never quit.” Stowell said he adopted this motto soon after her husband, also a mentor to Littlewood, gave him a significant dressing down about his performance in one race: “He quit in a race, and my husband told him it was not acceptable.”

Littlewood has plenty of other things on his plate off the water. Outside of Olympic gold, his other lofty ambition is to become a neuroscientist. But to get the obscenely high marks that requires, he needs to knuckle down to his studies given his time out of action this year.

In his final school year and with his final exams months away, he has had no time to celebrate his World Championship as he uses every spare moment outside of yachting to study. “I haven’t been relaxing,” he said. “It’s just been back to work.” And after he flies out this week for the Youth World Championships in Texas, it will be much the same story. “After the races, I’ll be relaxing — with schoolwork.”