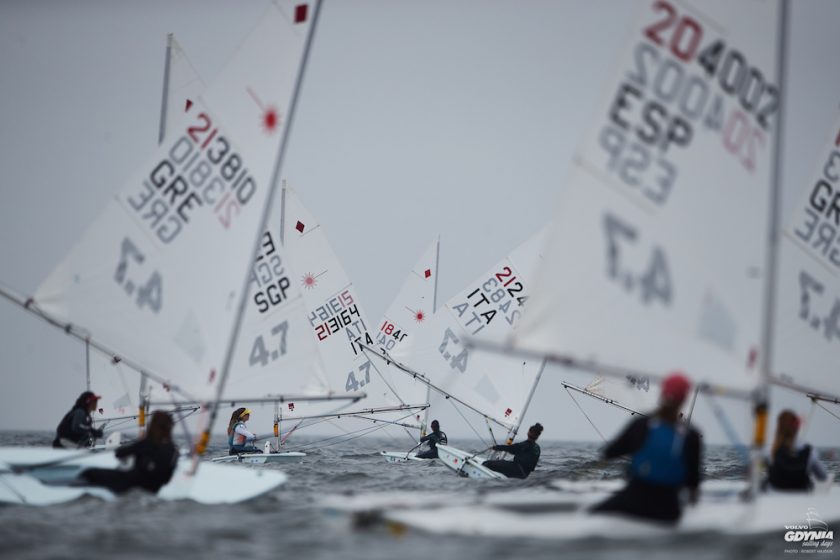 Just before the start of the 2018 Laser 4.7 Youth World Championships, we noted that it is “one of the more difficult World Championships to predict because sailors often make dramatic improvements from year to year in this age range. And as one year’s top sailors age out, it leaves the field open for newcomers and surprise challengers for the title.”

While some of the top level 4.7 sailors did quite well in this Championship, it seems we ended up with two surprise competitors who won the title in each of the boys and girls divisions, and perhaps none might have been more surprised than the winners themselves! The final day of the Championship brought overcast skies, a little cooler temperatures and occasional light rain. The wind was in the same direction as it had been the past several days (around 340 degrees), but a little bit lighter, around 7 to 10 knots for much of the afternoon.

In the girls fleet coming into the day it was a tight battle at the top between two Italians, overall leader Chiara Benini Floriani followed by Giorgia Cingolani who was five points back. Simone Chen (Singapore) and Eline Verstraelen (Belgium) were tied on points, but about 20 points behind second place, theoretically still in contention but needing quite a bit of help. In the first race of the day, Chiara did what she needed to do, finishing 3rd. And with Giorgia Cingolani unable to work her way out of the middle of the fleet, the Championship was effectively over.

After the days’ races, the 4.7 Girls Youth World Champion Chiara Benini Floriani said, “I didn’t really have any expectations coming in. This was my first championship, and I had been unable to sail earlier in the year. But in our first full day of racing when the wind filled in, I saw that I could sail in the top group.” With this confidence, she could focus on what seemed to matter most: reading the wind. In this venue, the biggest challenge sailors faced seemed to be figuring out what the wind was going to do next. “Most of the time I managed to get it right, but twice I missed badly and ended up on the wrong side of the course.” To win, sailors would need to sail consistently well and avoid big mistakes. That is just what Chiara managed in Gdynia, finishing in the top five in eight of the eleven races (finishing first in four of them!), with her lowest finish at 23 before the final race.

Singapore’s Simone Chen had a very good day with a 9th and a 2nd, and finished as the highest ranked sailor Under-16. Like the World Champion, she sailed consistently well and was usually in the top 10, with few bad races, and ending up only 10 points behind first. In the boys fleet, Australian sailor Michael Compton had taken the top spot the day before, but the regatta was far from over. One bad race can push you down the standings pretty quickly. Daniel Hung (Singapore), Stefano Viale (Peru), or Doruk Demircan (Turkey) each might have a chance if they sailed well and had some luck go their way. In the first race of the day, Daniel Hung had another very good performance, finishing fifth, and had closed the gap between second place and first from 19 down to 6 points. With the Championship on the line, Michael Compton wanted to stay close to Daniel. He didn’t need to beat him, but just not let too many boats get between them. Coming into the leeward gate, he was right where he needed to be: close. Unfortunately, he was a bit too close, making contact with the boat clear ahead and having to take a two turns penalty. It was a costly mistake, but a valuable lesson learned. Still, even if it felt a little disappointing to have a Championship slip away like that, it was a very impressive result for Compton as he was the top sailor Under 16 in the boys division. Daniel Hung, the new 4.7 Boys Youth World Champion, was quite surprised by how everything turned out. “Coming in, I wasn’t sure what to expect, but was maybe just hoping to be in the Gold fleet.” His initial reaction was similar to that of the Girls World Champion: “After the first several races, I saw that I could sail near the front of the fleet. So then I was thinking that maybe I could make a spot on the podium [in the top three]. On the last day, I was in third and was quite happy to be there, but then after the first race the sailors ahead of me had some problems and now I was in second. Then I managed to win it all.” He was glad for the relatively light air all week. “I am not that big, so on the day when we had 15 knots, it was already difficult to keep the boat flat and fast. It was fortunate for me that it didn’t get too windy. I had good starts and was reading the wind pretty well and everything just came together.”