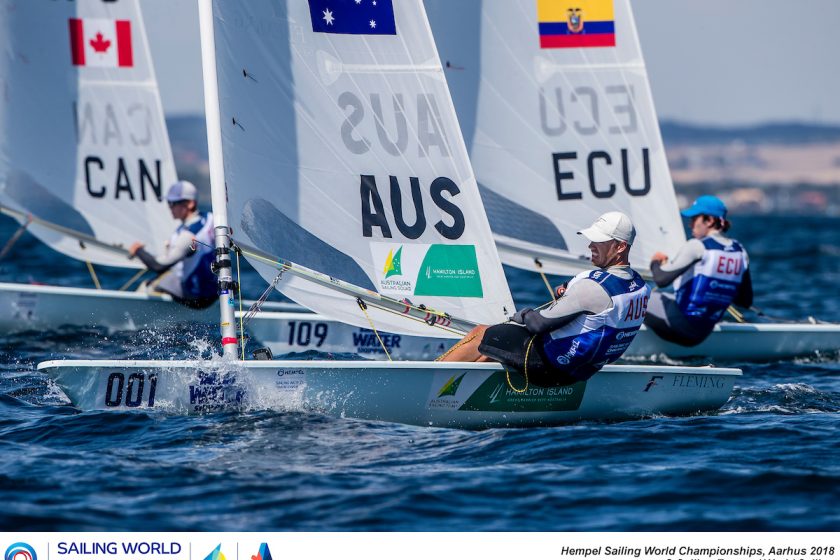 Day one of racing was played out under a bright sunshine, and the absence of clouds aided the earlier arrival of the south to south-easterly sea breeze that built from 8 to 12 knots with gusts of 16.

The huge Laser and Laser Radial fleets got underway and it was no surprise to see the Dutch Rio Olympic champion and three-time world champion Marit Bouwmeester near the top of the leaderboard. Although, even Bouwmeester did not have it her own way, with her young compatriot, Maxime Jonker, winning the first race ahead of her. It underlined the strength in depth of the Netherlands program.

Vasileia Karachaliou, of Greece and U.S. sailor Paige Raily sit tied on top of the leader board, each with a first and second place finish in their fleets. The pair are followed closely by Norway’s Line Flem Host and Bouwmeester, tied for third place with 5 points each.

Commenting on the racing, Karachaliou said, “Today we had really nice conditions on the water, a sunny and warm normal sea breeze up to 11 knots. My strategy was to try and keep it simple, try to get good starts without thinking that this regatta is the most important of the year. I tried to stay concentrated and everything else came along. I feel very proud and rewarded for all the work I have put in to this.”

With 165 entries, the Laser division was split into three fleets. New Zealand 2016 Olympic bronze medallist, Sam Meech, was perfect in his fleet, winning both races on the day.

“It’s a perfect start for me,” said Meech. “I couldn’t really ask for much more from a first day but it’s still really early in the regatta and I’m going to have to take it day by day, but looking forward to the rest of the week. There were some dangerous moments but I managed to make a couple of good decisions which led to two good races and my speed was reasonably good as well.”

Meech has his work cut out for him as he is followed in the standings by arguably the most talented sailors on the planet and there are a lot of races left in the championship. Finland’s
Kaarle Tapper had a superb day of racing with two second place finishes to hold second place overall, which two-time Laser World Champion, Nick Thompson, of Great Britain hold third overall.

Perennial top sailor, Philipp Buhl of Germany, who sits in fifth place overall commented on the racing: “The conditions started off light, but the wind developed. There was not much waiting around and I secured two good races – fourth in the first race and third in the second. We had 10 knots during the second race.

“I’m feeling confident. The conditions are very similar (to his home spot in Kiel). Similar wind patterns but Aarhus is much warmer and choppy. The conditions were different today, so I couldn’t get an advantage unfortunately. Its traditional of the Laser class to have the largest fleet, imagine 60 boats at a start line. It will get interesting when the gold and silver fleets arranged.”