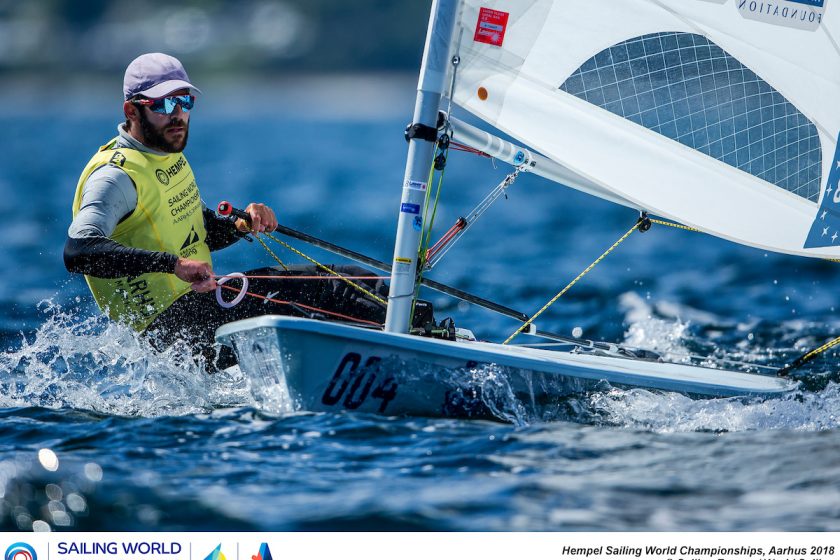 (Aarhus, Denmark) The final series at the 2018 Laser Standard and Radial World Championships came to a close today, the medal race fleets were decided for tomorrow, and qualifying countries confirmed their positions at the 2020 Olympics in Tokyo.

The Laser Radials had two races left to sail in order to conclude the series. After completing the final two races, Emma Plasschaert of Belgium has risen to secure an 11-point lead over her opponents. Rio gold medalist and Laser World Champion Marit Bouwmeester has finally made her appearance on the leaderboard, after slowly fighting back from some double-digit finishes the last couple days. Today, she won the first Gold fleet race and followed with a fifth place, sliding into second overall behind Plasschaert. Danish Anne-Marie Rindom had a difficult, inconsistent day finishing with a 3rd and 33rd, which moved her down to third overall and 23 points out of first. Overnight leader, Paige Raily of USA is sitting in fourth overall after today’s races. The Laser Standards only had one race to complete today in order to finalize the series. The top names in the Gold fleet saw many discard races today, but Olympic medalist and World Champion Pavlos Kontides was able to maintain his lead overall. Kontides finished in 14th place today behind Australia’s Matthew Wearn in 13th place, while Great Britain’s Elliot Hanson finished 23rd today, but the three are now leading the fleet, respectively. Kontides and Wearn are only four points apart headed into tomorrow, which means the medal race will be tight and will determine everything. New Zealand’s Sam Meech slid further back in the standings after suffering a disqualification race today, and Philipp Buhl of Germany has risen to fourth overall only four points behind Hanson. Medal races for both the Laser Standards and Radials are scheduled for tomorrow, August 11.