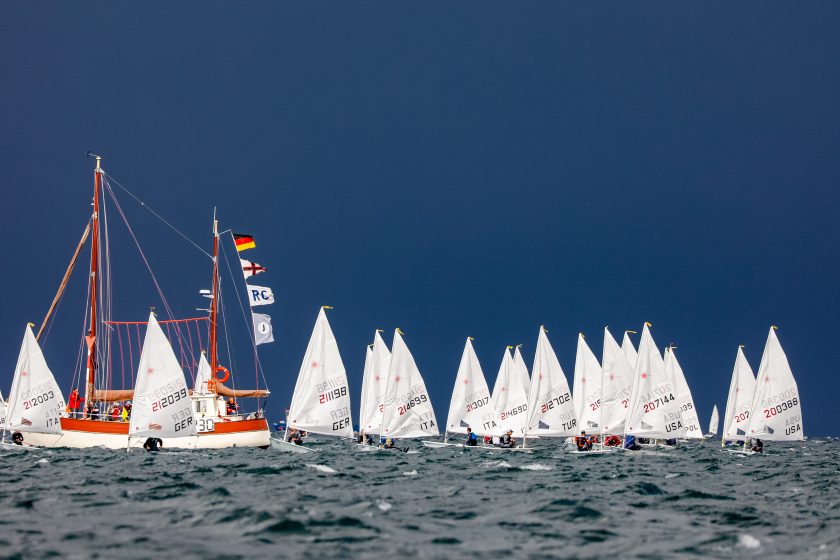 Two races were completed today at the Laser Radial Youth World Championships. The sailors faced heavier wind, waves, and even an approaching storm in Kiel today. After the first race, the sailors were waiting on the race course until the stormy clouds passed. “First there were really strong winds, then there was hardly anything left,” shared Laura Schewe of Germany. Two final races are scheduled for tomorrow, which will bring a close to the Championships.

Team Italy has made a statement at the World Championships thus far, with Matilda Talluri leading the girls’ Gold fleet, and Guido Gallinaro ahead of the boys’.

The most consistent performance in the girls’ division across the varying conditions was Spanish Ana Moncada Sánchez. After performing well yesterday in the light wind, she held her own in the stronger conditions today finishing with a 6th and a 4th place in the two races. Talluri, slightly more inconsistent, finished with a 5th and a 12th today, but has managed to maintain her lead ahead of Sánchez by three points. After facing a tougher day, Matilda Nicholls of Great Britain has held her position in the top three, but is now in third and nine points behind Sánchez. She had 11th- and 9th-place finishes today. Tomorrow will certainly be a battle with only three points separating the leader from second place.

“I thought I would like strong winds better, but then I took the waves badly, a gust got me, I had the wrong timing, and I capsized,” shared Alex Schonrock of Great Britain. With one day of racing left, Schonrock is leading the U-17 ranking and is in 12th place overall. She cannot afford a bad results anymore since she has already used her discard (penalty for pumping or swinging). Belgian Eline Verstraelen sits behind her in 14th place, but second in U-17, with Giorgia Cingolani from Italy sitting third in the U-17 division and 16th overall.

In the boys’ Gold fleet, overnight leader Uffe Tomasgaard of Norway had a difficult day of racing. In the first race, he finished top ten in ninth place, however he paired that with a 32nd in the second race. At the same time, Guido Gallinaro finished with a consistent 7th and 6th today, which boosted him to the top of the leaderboard and set him up well for the final day of the regatta. Tomasgaard is sitting in fourth overall behind Francesco Viel of Italy. The notable performance today came from New Zealand’s Josh Armit, who has made his appearance at last onto the leaderboard in the final series. He has been climbing his way up the rankings, but yesterday he had to retire from a race after a Rule 42 violation, which gave him a 69th place to discard. Today, he stepped up his game finishing with a 6th and 5th and is now sitting in second overall. “It was a good day today,” Armit explains. “I had a lot of fun out there.”

“In the meantime, there were up to 38 knots of wind keeping us busy,” explained the race organizer Mandus Freese. With that, the second race of the girls’ fleet had to be abandoned after the first upwind. With the strong gusts, there was also a big wind shift to the right and the warning about an approaching storm front. “We decided it would be better to cancel and keep everyone together.”

The final two races are scheduled for tomorrow in each division.