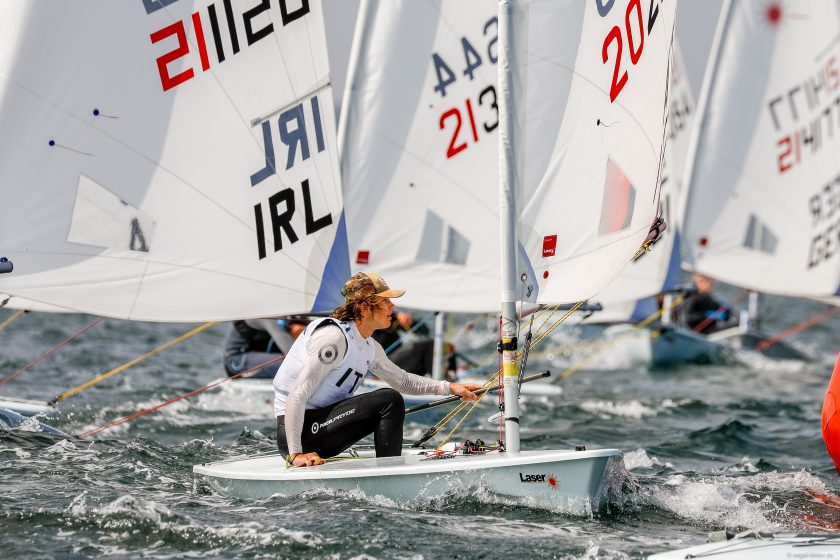 (Kiel, Germany) The Laser Radial Youth World Championships came to a close today after eleven races and six days. Only one race was completed today on the final day of the regatta, as the wind was on its way out. Around 400 young sailors from 45 nations competed in the Championships, and by the end of the event, three of the four titles went to Italy.

The stage was set yesterday for Italian domination when Matilda Talluri and Guido Gallinaro took the lead over both Gold fleets. The question was if they would both be able to defend their positions in the last day of racing. With only one race completed today, the odds increased in their favor. However, in today’s light wind, the racing was anything but predictable.

In the girls’ division, Talluri had only three points separating her from Spanish Ana Moncada Sánchez and twelve points of separation from Great Britain’s Matilda Nicholls heading into the final race. Unexpectedly, all three leaders of the fleet had double-digit finishes: Talluri placed 34th, Sánchez finished in 28th, and Nicholls had a 13th-place finish. When all was said and done, and discards were taken into account, Talluri was named World Champion, twelve points ahead of Nicholls, and Sánchez claimed bronze. “It’s wonderful. A dream has come true,” exclaimed Talluri, the new World Champion. She was nervous at the start, since the top of the fleet was very close together in points. “I have not been an excellent sailor so far,” she explained, which is why winning the title is so important to her.

Julia Buesselberg of Germany ended up in 4th overall. “I was a bit unlucky that the last race was cancelled, where I was in quite a good position,” she said. It would have been her last chance to fight for the two points separating her from bronze. “Actually, I am satisfied with my performance except for the first day of the final races, which cost me a medal.” Alex Schonrock of Great Britain finished ninth overall and was named the U17 champion in the girls’ division.

In the boys’ division, there was a similar pattern of inconsistency among the top sailors on the leaderboard. Gallinaro, however, was the exception. He began the day ten points ahead of New Zealand’s Josh Armit and managed to concentrate on his own race and claim a 6th-place finish in the final race. Meanwhile, the three sailors that have been battling all week with Gallinaro for the title, all suffered from double-digit finishes, which secured Gallinaro’s win overall. New Zealand’s Josh Armit finished 22nd, ahead of Norwegian Uffe Tomasgaard in 23rd, and Italy’s Francesco Viel in 52nd. “I gave my best,” Gallinaro shared. “I am happy, I have been waiting for the title.” With Gallinaro winning gold, Armit claimed silver, and Viel took bronze.

To round out the Italian trifecta of gold medallists, Cesare Barabino had an outstanding performance today. He not only won the final Gold fleet race of the series, but won the title for U17 champion in the boys’ division.

“We had all types of conditions from strong, to light, and shifting winds. The best sailors who could handle all conditions well, won the titles,” explained Eric Faust, Executive Secretary of the International Laser Class Association. “Whether the sailors will later be sailing in Olympic classes or the America’s Cup, they have spent some time in the Laser.”