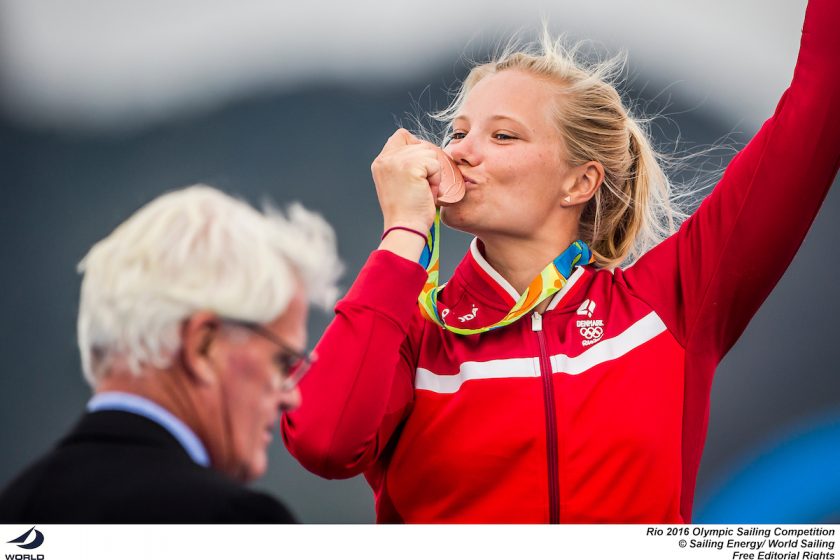 How old were you when you started sailing? I was 5 when I started sailing the Optimist. It was a red old-style Optimist. My brother and sister were sailing so I wanted to start as well. My dad is a sailor and he took me to Horsens Sailing Club where it all started.

Why did you first decide to sail the Laser Radial? And what has kept you sailing it since? I sailed the Europe for two years, but my dream was to go to the Olympics one day, so Laser Radial was the obvious choice. The Laser dinghy has a lot to offer. It is perhaps not the fastest boat, but the tactics, the physical part, and the fact that everybody has the same equipment are the things I like about it the most. Besides that, the competition in the class is so high, so you need to train a lot to be able to be at the top of the fleet.

When you were getting involved with the Laser Radial, were there any specific sailors you looked up to? I started right after the Olympics in Beijing and of course Anna Tunnicliffe was high on my list. It was impressive how hard she was training. I also looked up to the guys from Denmark sailing 49er and Finn. The training environment was very inspiring for me—how they helped each other to become the best in the world.

Have you achieved any of your early goals? When I first started sailing the Laser Radial in the fall of 2008 it was with the intention of being able to go to the ISAF Youth Worlds in 2009 in Buzios. My goal was to win a medal, but I knew that it was going to be a big challenge, since I had only sailed the Laser for six months. With help from the Laser Radial group at my home club in the spring of 2009 I was able to win the silver medal. I remember my dream about participating in the Olympics and one day winning an Olympic medal became big after that. After finishing 13th in the London Olympics of 2012, you stepped up your game and won the 2015 World Championships in Oman before claiming bronze at the 2016 World Championships in Mexico, the 2016 Rio Olympics, and the 2018 World Championships in Denmark. What changed for you after the London Olympics? Before London I had only sailed the boat for three and a half years and to be able to compete at the top of the fleet it takes a lot of training hours. I began to train more professionally, and I also started working with my coach Piotr Wojewski. I remember he said, “We don’t have a long time until the Olympics and if you want to be the best, you have to think, act, and believe that you can do it.” That was three years prior to the Olympics and I think that was the biggest change and the most important.

The 2017 World Championships were tough for you, finishing in 21st—what happened at that regatta that was so difficult? After the Rio Olympics I took some time off to study full time. During the winter I went skiing with my family and I broke my arm in two places. I have been skiing all my life but that year I decided to try snowboarding. Big mistake. It took me three months before I could sail again. The training period leading up to the regatta was therefore not according to the plan. Besides that, Medemblik was not an easy regatta. A lot of tricky and light wind.

How did your second Olympic experience in Rio compare to your first in London? In London I was young, and I was there to learn as much as possible. For me just going there was a big thing and the result didn’t matter so much. It was a big experience just to go to the Olympics, especially when it was so close to Denmark. Rio was different. My goal was to go home with a medal and I knew that I had a real chance if everything came together. Everything became about how I could achieve this goal. I was preparing a lot. The whole experience after winning the bronze medal was amazing. The Hempel Sailing World Championship was the ultimate event of 2018 and an opportunity to qualify Denmark for the 2020 Olympics. How did you prepare for the event, and how did you maintain your focus and performance at such a high-pressure event in your home country? We have a very good training environment in Aarhus and in general on the Danish team. We help each other, and especially when we have an important regatta, we support each other and remember to also have a good time. These things are very important when you must perform, I think.

My focus before the Championship in Aarhus was mostly on mental training, because I knew that there were many factors that could disturb my sailing. Other than that, my preparation for Aarhus was not much different from any other big event.

In Aarhus, there were a lot of women that struggled with consistency. How did you maintain your results to win bronze? How did it feel winning a medal in your home country? The weather conditions in Aarhus were very unusual. There was a lot of light wind and some days we didn’t start until 5 pm. After the qualifying series I was leading the regatta, but the finals were tricky—especially in two races where I finished around 40th. After those two races I was not able to fight for silver or gold in the medal race. I was very disappointed about that. But even though I was disappointed I was still happy to win a medal. It was a special experience to have friends and family around to celebrate. How do you work at reducing mistakes at this level of sailing? Mental training and preparation is the key to consistency in my sailing. I am working with a sport psychologist and adversity during big events is something that we prepare for. To be able to visualize those difficult situations and find a strategy to overcome them are crucial. Sailing is not about winning every race but about turning those difficult situations into ‘okay races.’ At the end of the regatta, that is what puts you on the podium.

Do you have any particular “rituals” before going out on the water to compete? I do have routines before going out and before the races on the water. Routines help me to stay focused and make me calmer. Whenever I feel nervous or unfocused I try to realize as soon as possible and then work my way back to the routines. As you continue in your third Olympic campaign, what are your strengths that you plan to enhance and what areas do you need to improve to make it in Tokyo? The conditions in Tokyo are difficult, so to spend time there and learn how the wind reacts is going to be the most important thing in the preparation before the Olympics. Besides that, I think that mental preparation is the key in winning a medal at the Olympics. Everybody in the top 10 at the Worlds has the sailing skills to win, but what puts you ahead are your mental skills. In my sailing I try to make everything as simple as possible. And I see that as one of my strengths.

As such an outstanding athlete for Denmark, do you interact with any younger sailors who may be striving to be like you one day? Yes, the Danish team model is to help young sailors to become better. We have training camps during the year where everybody is invited and the new sailing center in Aarhus is creating a great training environment where everybody can learn. Even though I sailed the Laser for 10 years now, I still learn from the young sailors and they push me to work even harder. So I think that is great and that is one of the things that keeps me motivated. Do you attend a University? What do you study? I study part-time at Aarhus University. I just finished my bachelor’s degree and began my Master of Sport Science.

Do you plan to pursue those studies later at some point in life? Yes, I do, I am very interested in elite sports and sports in general. I would like to work in a sport federation with talent development. Another area of my education is to use sports as an integration for refugees. In sports you don’t need to know the language to be able to participate and therefore it’s a great tool for integration in the country. Maybe later in my life I would like to work in that area.

What do you enjoy doing when you need a break from sailing? I enjoy being with my friends and family. In general, I like being active in my breaks from sailing. It’s hard for me to sit still. Most recently I’ve been trying to learn how to kitesurf. Maybe this will go better than the snowboarding.

What would you like readers to know about Anne-Marie Rindom as a person? I am maybe one of the most childish people on earth and I like chocolate a lot!