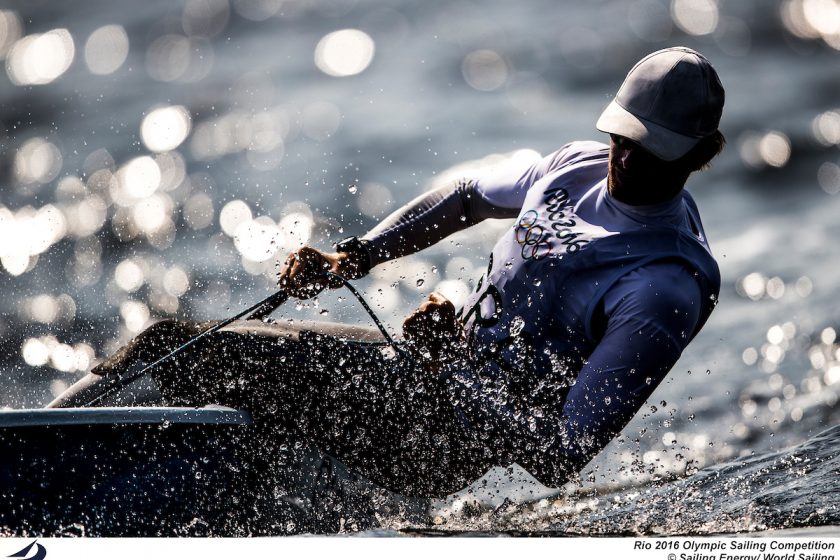 How old were you when you started sailing? I started sailing at the age of 7 in my Optimist (21019), in Ste Maxime a small town in front of St Tropez.

Why did you first decide to sail the Laser? After the Optimist where I was clearly too tall, I really wanted to sail 420 but I wanted to also steer the boat. Because I was too tall to helm a 420, my dad gave me a Laser and I did my first race in a 4.7 where I won the Europeans under 15.

What was your first international Laser regatta and first international Laser podium? Well the best memory comes from my first big travel around the world when after one year in the Radial, I decided to go to Australia for the World Championships. I was 16 and I won. It was so exciting to go that far from my own city for such a great event in Brisbane. After that I was ready to sign up for a lot of years.

When you were getting involved in sailing the Laser, were there any specific sailors you looked up to? Yes, of course, my first Laser coach was Robert Scheidt. I joined them for a sail coach camp in the south of France. Since then I worked hard to sail as well as him. And because he is coming back, I will push myself harder to race against him inTokyo.

In 2008, you competed in Beijing at your first Olympic Games. What was that experience like as the youngest member of the French team? It was amazing, the opening ceremony, but also the first day of sailing where I won a race; it’s the game that I enjoy the most.

Fast-forward eight years, and you competed in the London Olympics, made the podium at the World Championships in Mexico and the Sailing World Cup events, not to mention placed 5th at the Rio Olympics. How have you improved from that first Olympic experience to your third? How were each of the experiences different? Well in Beijing I was very young and good in very light wind. Over those eight years I worked hard on improving my technique and tactics, and of course my physique to be versatile in every condition of wind. Laser class is one of the best to see some young guys improving fast, and that helps challenge you every day to be a better sailor.

2018 started out a little rough for you, finishing 35th at the World Cup in Miami. What were your challenges in that regatta? Miami is a special regatta for me because it is in the middle of winter training. Usually we use this race to see how much work we still have to do… and clearly this year’s I did not work enough!

Fortunately, you didn’t let that regatta affect your outstanding performance in Hyères where you won the World Cup event in your home country. Are you familiar with sailing there and did that help your performance? I don’t train there but I live nearby and with all those regattas, we spend a lot of time in Hyères. Knowing a sailing venue always helps. The wind system, waves, current… if you can be used to the place it helps so much.

How did you feel competing at the Hempel Sailing World Championships this year in Aarhus and qualifying your country for the 2020 Olympics? With fewer nations in the Laser full rig, the selection of the country is not that simple and it was the primary goal. I was also chasing the podium but it was not for this year.

While you are sailing against an extremely strong fleet of Laser sailors, it is often about minimizing mistakes at this level. How do you work at reducing mistakes? Yes, the level and the density of the fleet is really high, and that’s why I take much pleasure in sailing against those guys. As my coach told me when I was a kid, you are not winning a race, you just make fewer mistakes. How? That’s a question of placement, speed, and risk.

With 2018 coming to an end, what are your goals for the new year? I never won a World Championship, so that is my goal for 2019. But most important is to prepare well for the 2020 Olympics in winter training.

As you’re headed into your fourth Olympic campaign in the Laser, will this be the last or are you looking forward to the 2024 Olympics in your home country? Sailing the Olympics at home could be amazing and to be honest, I am thinking of that. But what better way to prepare for Paris than gold in Tokyo?! I am focusing on Tokyo and we’ll see what happens there.

You have quite a bit of experience in many different types of sailboats from Stars to match racing – when you’re not sailing the Laser, what’s your favorite boat to sail? Match racing or flying boats, because it is so intense. The stress we feel in a Laser fleet and the adrenaline can only come from very fast boats or a high level of competition. Maybe one day it will be both together.

Do you have any particular “rituals” or routines that you do before competing? No, stretching (I am getting old).

What do you enjoy doing when you need a break from sailing? Going in the mountains, doing sports, cruising…

What is your favorite place that you have traveled to because of sailing? South Africa and Mexico.