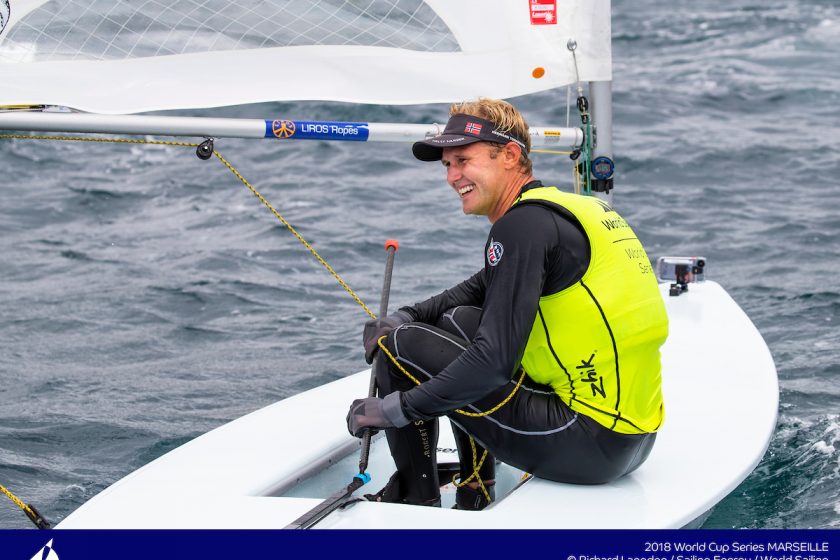 Did anyone else in your family sail? None of them had sailed a lot, but we had a keelboat that we used to sail down towards Denmark for the summer holidays and some local regattas as well.

Why did you first decide to sail the Laser? And what has kept you sailing it since? When I was about to change from the Optimist to another class, the Europe dinghy had been the leading class in Norway, but it was in decline. So I chose the Laser which had a big international fleet in the Laser 4.7, although the number of Norwegian sailors was very low at that time. I also saw that a lot of the foreign sailors I had been competing with in the Optimist were changing to the Laser 4.7.

I really enjoy how simple the Laser is and how all the equipment is the same. This makes the racing really close and intense. It is also the only option in Norway if you want to sail a single-handed boat.

When you were getting involved in sailing the Laser, were there any specific sailors you looked up to or strived to be like some day? Kristian Ruth who was very positive and inclusive with all the young sailors.

Your performance has improved quite a bit just in the last year – finishing nearly all top 10s at the high-level events. What changed for you and your sailing in 2018? I think maybe the main difference is that my boat speed has gotten better in average. The Laser fleet is such a big fleet with so many competitive sailors so it is really difficult to get clear and make your own tactical and strategical decisions if you are struggling with the boat speed. A little better boat speed opens up lot more opportunities to sail the race how you plan.

The Hempel Sailing World Championship was the ultimate event of last year, and an opportunity to qualify Norway for the 2020 Olympics. How did you prepare for the event, and how did you maintain your focus and performance at such a high-pressure event? I prepared for the event by spending a lot of weeks training in Aarhus before going home for a short rest. Then I came back again just before the regatta. It was very convenient for me to have an event in Denmark. The event was first qualifiers and then finals with only one discard. For me it was very important to not get too eager to win races in the qualifiers and then take too many risks, but instead to keep an average low score so that the discard could be used in the finals.

You also had a notable win recently at the Caribbean Laser Midwinter Regatta in the Dominican Republic. Why did you decide to train in Cabarete, have you trained there before, and how has it affected your sailing? I actually finished second in the regatta after Jesper Stålheim, but with equal points. I decided to go to Cabarete because it was a very good group there with the British and Jesper. I had never trained there before, and it was a very nice experience. A very big difference in both culture and climate to what I am used to north of Europe. It was strong winds every day so really good to build up hiking endurance.

Tell us a little more about Miami. You won that regatta by over 40 points, which was a remarkable feat in such strong fleet of Laser sailors. What happened mentally and on the water there that made you so successful at the event? I find that hard to answer. If I had to point out one thing which was a lot better than before, I would say my starts. I have always been struggling a little with the timing in the starts, but during the week in Miami almost every start was good enough to be in the top of the fleet straight away.

You have kicked off 2019 strong after such an outstanding performance in Miami. What are your goals for the rest of the year to continue your preparation for Tokyo? My goal for the rest of the season is to try to stabilize being among the sailors fighting for the medals. This will be an important stepping stone towards having a chance at a medal in the Tokyo Olympics.

In an extremely strong fleet of competition, how do you work at minimizing mistakes or minimizing their impact? In sailing, which is such a complex sport, everyone will make mistakes all the time. I try to not let my mistakes influence my decisions afterwards and still manage to stay objective. This is very difficult and I still have a lot to learn here for sure.

Do you have any particular “rituals” or routines that you do before going out on the water to compete?I always have to have a big bowl of porridge in the morning.

Have you attained a degree already or do you plan to pursue a degree in the future? In what area of study? I have started a masters degree in marine engineering. I have completed three out of five years, but at the moment I am sailing full time.

What is your favorite place that you have traveled to because of sailing?Cabarete.

What would you like people to know about Hermann Tomasgaard?I am really grateful that I have been given the opportunity to be able to sail full time to try to reach my goals. I spend a lot of time away from friends and family and I couldn’t have done this without their support, as well as the support from the sailing team and the sailing club.