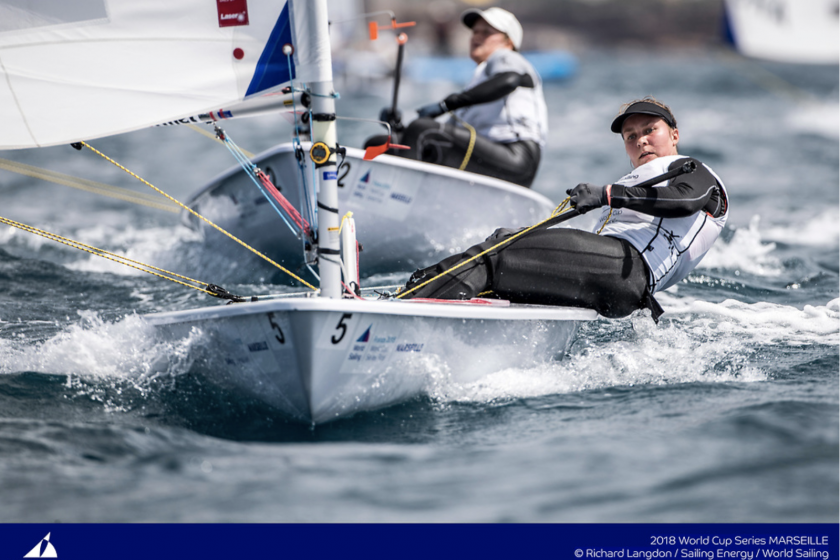 How did you get involved with sailing? My father, who has been sailing too, took me to a sailing course at my club when I was 7 and I really liked it.

What made you decide to sail the Laser Radial and what has kept you sailing it since? I wanted to sail single-handed and I also wanted to sail an Olympic class so it was an obvious choice for me.

Were there any sailors that you strived to be like when you were first getting involved? Sari Multala was a top sailor already when I started to race in Optimists and I wanted to be as good as she was.

In 2007 you won the Laser Radial Youth Worlds in the Netherlands. What was that experience like for you as a young Radial sailor? It was definitely a dream come true to win an event like that. I still remember the excitement of the last few days when I knew that I had the possibility of winning a medal.

Tell us about your first Olympic Games in Beijing. You must have been one of the youngest in the fleet – what was most challenging and what did you learn from the experience? It was an exciting experience. I didn’t have much experience yet so everything was really new. Now looking back, I think that the biggest challenge was to believe in myself and to be able to fully focus on sailing and forget all the hassle around. Anyway, I feel that it helped me a lot in Rio that I had already experienced the Games one time and knew a bit how it would be. I could use that experience when preparing for Rio.

After missing the 2012 Olympic qualification for Laser Radials to Sari Multala, you certainly stepped up your game in the following four years. You finished in the top 5 of every World Championship from 2013 through Rio where you finished 5th. What changed mentally for you and how did you maintain such consistent performance through the 2016 Olympics? I think that the reason why I had a good 2013 was because I took a bit of a break in the summer of 2012 and then we started working very hard already in the autumn of 2012 to become as good as possible in all the conditions at the same time when most of the girls were probably having a small break after the Games. Then after having a good year in 2013 it was easier to believe in my possibilities to continue doing well in the following years.

How was your second Olympic experience different from your first? They were very different. The first time in 2008 I didn’t really know what to expect. Before Rio I knew a bit about what kind of event the Games are and my sailing skills were totally on different level than in Beijing. I had prepared well and my goal was to get a medal. Of course in the end I did not get a medal, but the games were still a great experience and I’m happy that I was able to sail a consistent week.

How did you prepare for the Hempel Sailing World Championships last year, and how do you feel that event went for you? The Worlds in Aarhus was my main goal last year, so we were training there a few weeks in July to get familiar with the venue. My regatta started well, but I didn’t manage to sail well the last days and therefore the result, finishing 14th, was a disappointment for me. However, I tried to learn as much as possible from my mistakes during the last days.

You just showed a great performance in Palma, finishing 4th overall at the Princess Sofia Trophy. To what do you owe your success of that event? In Palma I was able to sail quite a consistent week and I think that the main reason was that I was able to sail good races also in light winds. Improving in light wind sailing has been one of my goals in the winter training so I hope that I can see the improvement also in the next regattas.

What are your goals for 2019? What strengths do you plan to enhance and what areas will you work to improve? My goal is to sail a consistent season and especially to sail well in the World Championships in Japan. I need to continue improving all the areas of my sailing, especially my performance in light wind as well as in very strong wind.

As you’re competing in a very talented fleet of Radial sailors, how do you work at minimizing mistakes and maintaining mental composure on the race course? I try to believe in my own observations. I also try to remember that there is a possibility to gain places all the way until the finish line.

Have you attained a degree and do you plan to pursue the area of study in the future? I’m studying biotechnology and I really like it. I hope to be able to work in that field after I finish sailing.

What is your favorite activity outside of sailing? I like doing other outdoor sports like cross-country skiing and orienteering. They are both also good physical training for sailing.

How do you spend your free time when you’re not sailing? I like to be with my family and friends and go out for some small treks in the forest. It’s also nice just to be at home and not do much.

Where is your favorite place that you have travelled to for sailing?This is a hard question as there are so many nice places, but I would say Hyeres or Garda. I like the sailing in Hyeres and Garda is one of the most beautiful places I have been in.

What would you like readers to know about Tuula Tenkanen as a person? I’m sometimes a bit shy with new people, but I’m still always happy to meet new people and learn from them. I’m also very thankful to all the people that are supporting and working with me. Even if we are sailing alone it’s a team sport.