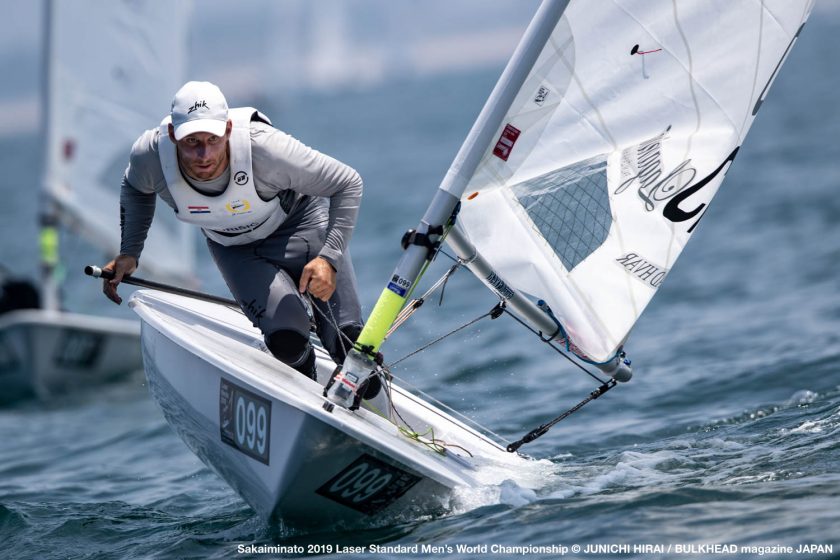 (Miho Bay, Japan)  Confirming that it is likely of the toughest, most
competitive championships in the sport of sailing, only 10 points
separate the top-10 sailors after day-one of the 2019 ILCA Laser
Standard Men’s World Championship. After a morning postponement on
shore, the 159 sailors from 57 countries in the 2019 ILCA Laser
Standard Men’s World Championship were met with sunny skies and light
winds for the first two races of the regatta.  To add to the pressure
of a world championship, Olympic hopes are on the line as five sailors
will qualify their countries to participate in the Tokyo 2020 Games.
This is the third country qualifying event for the Laser Class, with
15 places awarded at the 2018 World Championship and one at the recent
Asian Games. At this event, sailors will compete in three fleets
during the qualifying series to determine the gold, silver and bronze
fleets later in the week.

After a few requisite opening-day general recalls, the Yellow Fleet
got off clean in a 7-knot northeast breeze. Filip Jurisic of Croatia
found the conditions to his liking, taking first place ahead of
Switzerland’s Eliot Merceron. Sailing a nice tactical race and
charging hard for third place was Chusitt Punjamala of Thailand.  In
the Blue Fleet, American, Henry Marshall took the line honors, holding
off Australia’s Olympic gold medalist, Tom Burton in second. Third
place went to Jean-Baptiste Bernaz of France.  After a few
postponements and course adjustments, the Red Fleet finally got away
on a clean start. Italy’s Marco Gallo showed good downwind speed to
take the lead on the first run, and then held off George Gautrey from
New Zealand for the win. Just behind Gautrey was Ireland’s Ewan
McMahon in third place.

The Yellow Fleet started Race 2 in a 5-7 knot breeze that failed to
fully stabilize during the day. With the wind shifting to the north
over the afternoon, the left side of the course seemed to pay
dividends.  Hermann Tomasgaard from Norway pulled away from the fleet
and sailed to, what appeared to be, an easy win. Following Tormasgaard
were Benjamin Vadnai from Hungary and Jurisic, who again showed
excellent form to finish third in the challenging light wind
conditions.

Race 2 for the Blue Fleet finally got underway after a number of
general recalls. With the breeze building slightly up to around 10
knots, Jack Wetherell from Great Britain showed excellent poise in
holding off two of the most experienced sailors in the fleet –
Jean-Baptiste Bernaz of France and Brazil’s legendary Robert Scheidt,
who finished second and third respectively.  After more course
adjustments the Red Fleet started their second race of the day as the
wind shifted back to the right and a slight haze settled over the
course area. Sergei Komissarov from Russia took the win. Showing
exceptional consistency, New Zealand’s George Gautrey once again found
himself at the top of the fleet to finish second followed by Sweden’s
Jesper Stalheim.  Qualifying races continue tomorrow with two races
scheduled.