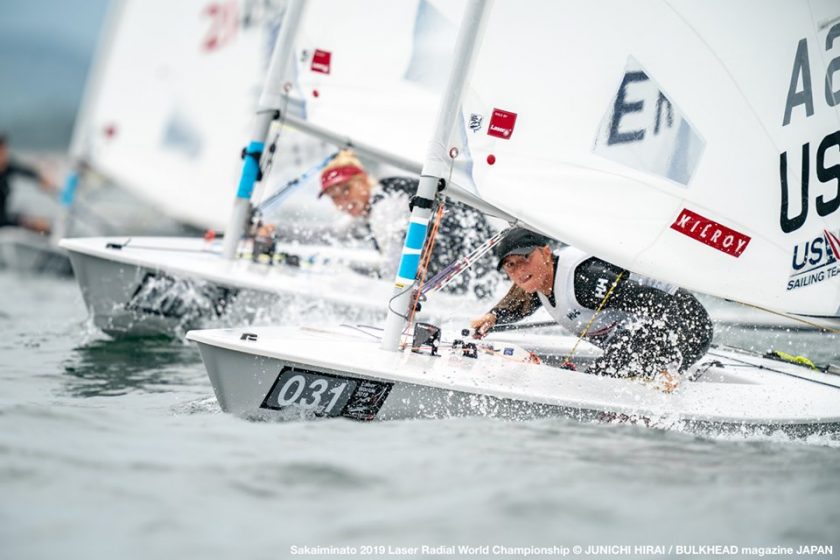 Sailors headed out to the course under overcast skies and a light drizzle.  Clouds perched on the peak of Daisen and nestled in the surrounding hills.  But 10 to 15 knots out of the East showed for a promising day.  The Men started cleanly, at 1105h as scheduled, although a late shift to the left favored the pin enough for boats to tack and cross the fleet.

Race committee dropped the pin back to square the line, but it took several attempts to get the more aggressive Women’s fleets on the inner loop of the course.  Both had general recalls on their first start, under U flag, and both lost four or five boats to BFD penalties in the second start, although Yellow continued racing and Blue required a third attempt.

In Yellow, boats on the right seemed to do well, with Line Flem Host (NOR), Maxime Jonker (NOR), and Joyce Floridia (ITA) leading at the first mark.  These three stayed up front for the run and RC moved the weather mark five degrees left for the second beat to accommodate the shift that appeared to settle in.  After the run down the outer loop, the lead pack was mostly stable, with Floridia (ITA) claiming the bullet, followed by Jonker (NOR) and Flem Host (NOR).

After Blue had a clear start on the third attempt, boats worked the middle left of the course.  Early leaders at the top mark included Svenja Weger (GER), Tuula Tenkanen (FIN), Sarah Douglas (CAN), and Erika Reinecke (USA).  Athanasia Fakidi (GRE) and Josefin Olsson (SWE) maintained pressure on the lead pack.  This remained a tight group through the run and back up the second beat.  Ultimately, Marie Bolou (FRA), moved up through the fleet to win the race, followed by Olsson (SWE) and Reinecke (USA).

While this racing was going on, the Men finished Race 2, with Simon de Gendt (BEL) taking the win.  Zac West (AUS), Jan Heuninck (BEL), and Guilherme Perez (BRA) took subsequent places.  The Men started and finished a second race for the day (Race 3), with a win by Nobuyasu Sugita (JPN).

But the wind was softening by early afternoon, down to 6 to 8 knots, and getting shifter.  RC postponed for a while until the wind settled in at 80 deg, and Yellow started a second race after one general recall.  But this race was abandoned after less than 10 minutes when became clear that the wind was continuing to drop.  Sailors waited under a postponement while RC monitored the conditions, and racing for day was cancelled at 1445h.

The Men have completed three races now.  Zac West (AUS) is leading the fleet with 14 points, followed by Onodera Shoichiro (JPN) with 22, and a tie for third by Simon de Gendt (BEL) and Guilherme Perez (BRA) with 26.  The Women have only completed two, but Josefin Olsson (SWE), Marie Bolou (FRA), and Line Flem Host (NOR) are leading the fleet with only top three finishes.