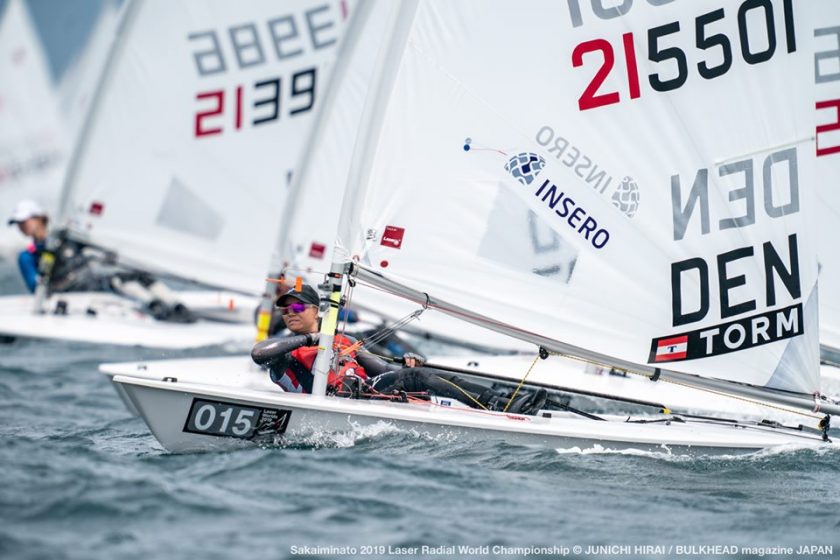 It was a fine day for Laser racing at Laser Radial Worlds – clear skies and a mostly steady 18-20 knot Westerly.  They call this the Kamikaze Wind.  The velocity varied a bit, with gusts in the low 20s and lulls down to about 15.  The heading varied five degrees around the average, maybe ten at a few points, but it was never sustained long enough for a major course change.  It was a day to stay in phase and stay in the pressure.

The shake-up of the leaderboard for Radial Women’s that began yesterday continued today.  Yesterday’s leader, Ecem Güzel (TUR), finished 26th in the first race today, which is now her discard.  Several others in the top-ten had double digit finishes in that race, as well, which was won by Josefin Olsson (SWE), working to recover from letter scores yesterday.

The top three in the second race were Line Flem Høst (NOR), Mária Érdi (HUN), and Emma Plasschaert (BEL), none of whom are in contention to win, but their finishes influenced the standings for the end of today.  Anne-Marie Rindom (DEN) sailed the most consistently, with a 2nd and a 5th, and is currently leading.  A second discard becomes available to the racers after one race tomorrow.  For Rindom, a second discard will allow her to discard a 28th from the Qualifying Series, making her a strong contender to win the event.

In the Radial Men’s Worlds, two races today brought a second discard into play.  Simon de Gednt (BEL) now only counts a string of 1sts and one 2nd, discarding a UFD and a 23 and is the clear leader with 9 points.  Zac West (AUS) is safely in second place with 20 points, followed by Mark Louis (AUS) with 39.

But berths for the 2020 Olympic Games is an important factor in the Women’s Worlds – fourteen countries in the Gold fleet are competing for the ten spots allocated for this event.  At the end of Day 5, Croatia (CRO), Argentina (ARG), and Australia (AUS) are likely to compete in 2020.  Russia (RUS), Lithuania (LTU), Belarus (BLR), and New Zealand (NZL) would be qualified if racing ended today, but they are closely followed by Guatemala (GUA), Thailand (THA), Spain (ESP), and Saint Lucia (LCA).

One more day of racing, with two races scheduled, and the forecast calls for similar winds.  We’ll see what happens, but as of now: