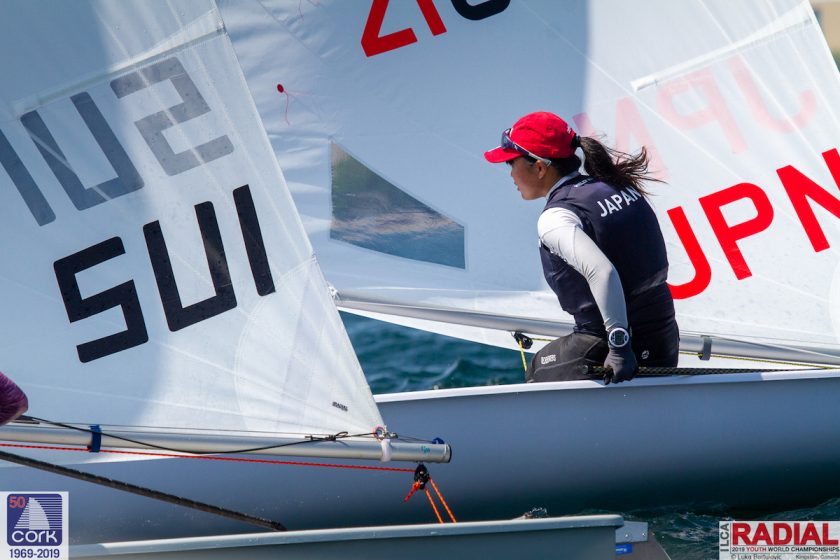 The first day of competition in the 2019 Laser Radial Youth World Championships served up conditions that made life easy for Race Committee: enough wind to keep boats moving and only mild oscillations in direction. Providing a good bit of help, the modest current was working against the boats lining up to start.

Or perhaps the sailors were just being conservative, having only one potential discard in the Championship. It is a truism that you can’t win a regatta on day one, but you can lose it. Being over early on the first day really puts you in a tough spot the rest of the way. Perhaps it was this thought that led to zero recalls and only one single boat over the line under Uniform flag out of more than four hundred boats crossing the start line in the two schedule races for each of four fleets. Or maybe it WAS just the current holding everyone back after all. Competitors were able to ease into the Championship, facing only 6 to 8 knots in the day’s first race, and a series of very modest but unpredictable wind shifts. But even if conditions weren’t physically demanding, it was still sometimes challenging. “The shifts were a bit tricky out there,” said Matilda Nicholls of Great Britain, “but I am pretty happy with how things went.” Ending the day in third overall (at 17 points) was a good way to begin the Championship for her. Nichols is just behind Mina Fergusun of Australia and Eve McMahon of Ireland, who are tied at the top of the standings with 10 points each.

Two of the top contenders coming in to the event in the boys fleet did not quite start off the way they wanted. Turkish sailor Yalcin Yitak ended up with a DSQ in the first race after a protest hearing went against him, while Australia’s Zac Littlewood finished his first race just a little above mid fleet. Both sailors certainly have the potential to come back, but there isn’t much margin for error and still quite a few races to go. Ireland’s Tom Higgins had the best of it today in the three fleets of boys competing, with a first and a fifth in his two races. Martin Kowalski of France and Gaspar Strahovnik of Slovenia are just behind, with another dozen sailors only a handful of points back of them. It may take a while for things to shake out in the boys fleets, with hopefully a few surprises along the way. The wind strength had built up a little in the second race of the day, pushing into the 10 to 12 knot range as the heating land mass of Ontario started drawing the southwest breeze towards shore with a little more urgency. It had become pretty clear early on that conditions favored the left, and most sailors worked their way up that side of the course. As Jade Gavin of Switzerland put it, “I was about 20th after the start and I just sailed out to the left corner and came back across the fleet to round the windward mark in 2nd.” Gavin went on to win that first race. Some felt the pressure was a little better on the left side, others thought it was more that the adverse current was a bit lighter over there going upwind. Or perhaps it was some of each. Sometimes, though, there is too much of a good thing; more than a few sailors went out left and well overstood the mark, giving back a fair bit of what they had gained. There is always another lesson to be learned on the race course.

All in all, it was a good way to ease in to the Championships.