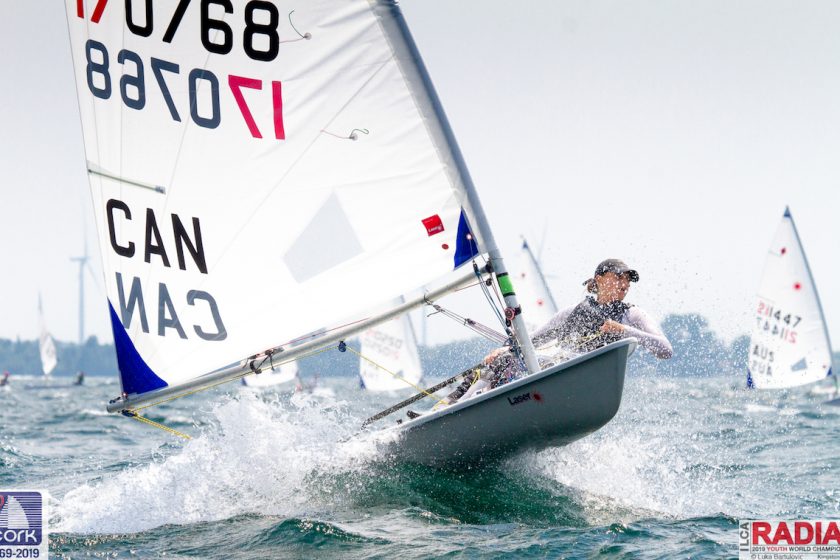 As anticipated, the wind started off a bit fresher today than our previous two days, with knot speeds in the mid to upper teens. It wasn’t survival conditions, but would at least give sailors  a workout.

The first rain shower slid off to the south of the race area, leaving behind moderately overcast skies. As the yellow fleet went through their start sequence for the first race of the day, it became more and more apparent that the committee boat was favored. The modestly oscillating breeze did not swing back to the left and with just over a minute to go, the Race Officer called for hoisting the AP to delay and adjust the line. So, with the line reset, everyone went through the sequence again and the flight was away.

Another ten minutes and blue fleet got off the line clean, too. Most of the competitors were favoring the left side of the course, as usual, but there seemed to be a shift half way up the first leg that drew attentive sailors to the right and they rounded mark 1 at the front of the fleet. Red fleet was crowding the line just a bit early and too many boats were OCS for proper identification, so RC gave the signal for recall and sailors had to restart. With the prospect of a DSQ under black flag, sailors gave a little more respect to the line this time and again, no sailors were disqualified for being over early. Michael Compton of Australia came through the gate first and most of the sailors followed him back upwind on course left, but none of them could catch him as he picked up his first win of the Championship.

The girls fleet again looked sharp, but they were just a shade more aggressive than usual and had one boat on the course side. There was no need for a general recall, though, as identification was clear. After one upwind and one downwind leg, the first few sailors opted to go ’round the gate and head to course left. Matilda Nicholls had the lead at that point and held on to win her first race of the Championship, moving her into first place in the standings after five races. She is followed by Eve McMahon of Ireland (dropping a 14 in the 5th race at the time). Paige Caldecoat bettered her 3rd place finishes on the prior day with a second, moving her into the top three. On the boys side, many of the top sailors coming into the day continued to shine with top ten finishes in the stronger breeze, with several of the sailors from down under coming out on top: Zac Littlewood joined fellow Australian Michael Compton with a win in his first race today, while Luke Cashmore of New Zealand finished second in his group. Still, the top two sailors in the standings coming into the day continued their hold of the overall lead: Greek sailor Emilios Monos added a third place finish in the days first race and is at six points after accounting for a discard. Yalcin Citak from Turkey picked up his first win in the Championship and closed the gap two more points, to sit just one point back of Monos after five race.

A little before the finish of the girls fleet in race one, the safety team was monitoring storm cells that were tracking towards Kingston, and some lightning strikes a bit to the east. The race officer was directed to hoist AP over H and send sailors back to the harbor. The first cell went north of Kingston, and the next band dissipated before reaching the race area. Keeping a close eye on the radar and various storm projections, the safety team deemed it safe enough to release RC and all fleets back onto the water. After spending time to reset the course, the first start was delayed to adjust the line. Wind speeds were still in the mid to upper teens at the time and the next sequence was clear and yellow fleet were off again for their second race of the day.

For the remaining fleets, it was an exercise in patience or frustration, depending on your perspective. The blue fleet start was delayed several times as consecutive wind shifts kept pushing to the right. Every time RC got a line square and the first leg set, the wind would again move another ten to fifteen degrees right, as we approached the final start signal. Everyone wants to be racing, but ensuring a square line is essential for a good, fair start. Sometimes nature gets in the way of your intentions and actions. Eventually the wind seemed to hold around 265, about 50 degrees right of where it had been for most of the regatta so far. The three fleets did manage to get clean, clear starts, but the change of wind direction was also accompanied by a reduction in strength as the wind fell from the teens to the low double digits down to five to seven knots. After an already long day at the race venue on and off the water, it was a test of resolve and patience for everyone. Race committee, monitoring conditions moment to moment, first shortened each of the inner and outer legs, and then finally set up to shorten course for all three of the fleets. To add even more of a challenge for the sailors, the wind swung back to 220, certainly frustrating those who had gone out to course right. Most (but not all) of the top sailors managed to figure it out.

What wind pressure there was seemed to hold into the early evening hours, enabling all boats to finish and return to shore.

It was a long and challenging day for Race Committee and sailors alike. Sometimes that is what weather conditions serve up. We should all be used to it by now.

So came the qualifying series to a close for the boys fleet, and the same half dozen races for the girls. It is way to early to be focused on even a handful of sailors as contenders for the title. Consistent sailing and limiting mistakes will continue to be crucial in securing a World Championship in both the girls fleet and the boys gold fleet. One bad race can send you down the rankings in a hurry.