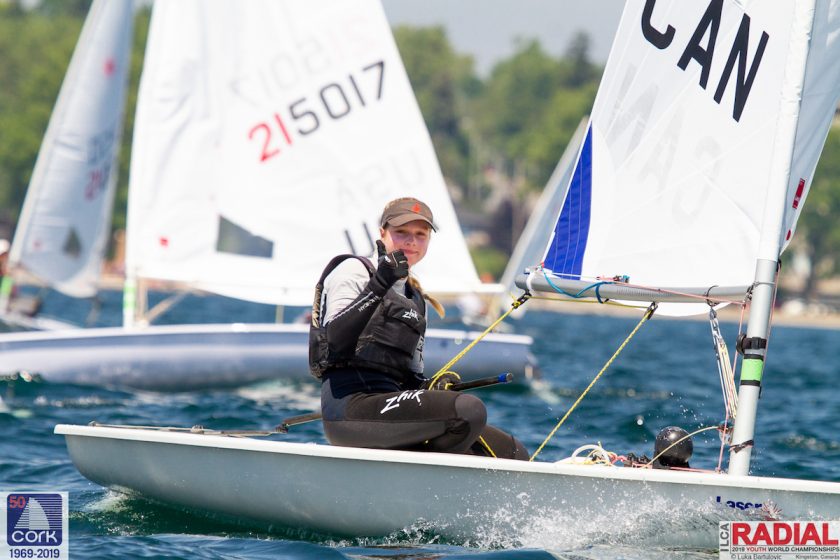 Whether it was the need to exercise a little more caution, or there was a little less nervousness in the lighter air to start the day (six or seven knots), or hearing your sail number called out loudly by the race officer when approaching near the line, all four fleets were able to get away on their first race today with nice even fleet starts, though the girls uncharacteristically had a fair bit of mid-line sag. Even the seemingly repentant bronze fleet was able to avoid a general recall, and only three boats were a bit too aggressive and got caught out on the wrong side of the line, a dramatic improvement from the previous day.

Sailors and race committee alike had some challenges in dealing with a few significant shifts. The day started with wind around 265 after a brief rain shower, but then there was a persistent left shift over to 220, only to be succeeded awhile later by another shift halfway back to the right (around 240 to 245). So much for persistence. Mark layers were kept busy setting change marks, and re-squaring lines. Sailors were trying to figure out where the new wind would be coming from. In the second set of races, rain showers sliding just to the south of the race area again made conditions interesting for sailors and challenging for the race committee. As significant as the change in direction was the increase in wind strength, up to the mid teens. Everyone had to deal with at least one change of course, either in direction or distance or sometimes both. There was some concern that the wind would abate as the showers passed by but sailors continued to enjoy more breeze for the remainder of the afternoon.

It was a tough break coming in to the day for New Zealand’s Luke Cashmore who caught the bow of a boat from a different fleet right in the ribs during yesterday’s pre-start. And while he was able to get redress for two scores, and sits in third place, he is DNC after that so any more races will drop him out of the top standings. He had certainly been having a terrific regatta to that point. Going on the water again may not be an option, though.

Another sailor with a bad break was Australian Zac Littlewood who received a penalty on the water, and took his penalty turns, but alas did not execute them correctly. That gave him a DSQ (now discarded) instead of a 5th place. While he remains near the top of the standings at 4th overall, he would otherwise have been only four points behind the leader and in second. Although he has a chance to win, he is going to be nearly flawless tomorrow and hope that the two sailors ahead of him are the ones getting a bad break. Australian Michael Compton had an outstanding day, picking up wind shifts and avoiding trouble, winning both races in the gold fleet and moving up ten places in the standings to 5th. Compton has now positioned himself as the highest ranked sailor under 17 in the Boys Gold fleet, a bakers dozen ahead of British sailor Finley Dickinson.

Both Emilios Monos (Greece) and Yalcin Citak (Turkey) had nineteen points on the day, with Monos finishing three places ahead of his closest rival in the first race, and three points behind in the second race. The two of them will be keeping a close eye on each other tomorrow, but they can’t ignore everyone else in the fleet.

Seven points only separate sixth through tenth place so all of those sailors are looking for a strong final day to see if they can get into the top five or even a podium finish.

In the Girls Fleet, Matilda Nicholls (Great Britain) had a rough first race and is now counting that as a discard. Fortunately she was able to shake that off and earn a sixth in the second race. Pulling back in her prior discard of 10, she managed to hold or extend her lead on almost all the other sailors in the fleet. Only Thailand’s Sophia Montgomery made any significant ground with a fourth and a first, giving her a real shot at a podium finish if she keeps sailing the way she has lately, with top five finishes in the past five races, and perhaps even catching Even McMahon (Ireland) for the highest ranked sailor under 17. McMahon also had her worst race of the series in the first race of the day, and like Matilda Nicholls, will count that as a discard, at least for now. And, like Nicholls again, she bounced back in the second race with a solid fifth place finish. She remains in second place, ahead of Australian Paige Caldecoat who is not far back in third. With a good day tomorrow and a bad breaks for either of the sailors in front of her this Championship is also still very much in reach.

Ten good races are in the books, but the early forecast for tomorrow wasn’t particularly promising. Still, sailors and race officials alike will just have to deal with what the weather offers. A lot can change overnight. And a lot can change tomorrow if we are able to get two more good races in. There are still a handful of sailors who can win, and even more who might be aiming to earn a spot on the podium.