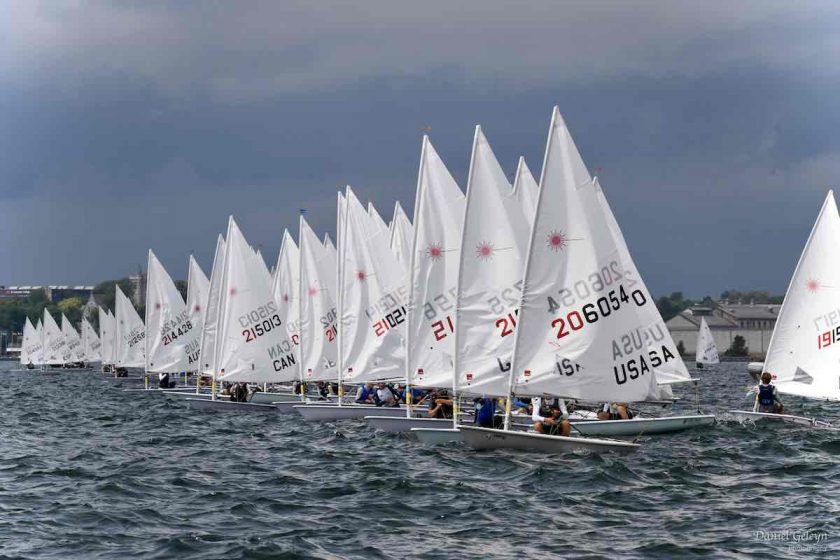 Today wasn’t about big wind shifts, or challenges in setting the course. It was all about the sailors, and making their own breaks.

Less than half a dozen hours before racing was scheduled to start, most of the forecast models were showing conditions that would be adequate for competing, with a southwest breeze around seven or eight knots. But by the time the first warning signal sounded, the signal boat was seeing readings mostly in the mid teens. The skies were more beautiful than they had been all week, with cumulus clouds piling up to the north, sunshine sparkling on the fresh blue-green water of Lake Ontario and a building sea breeze.

In the first race of the day, the Boys Gold Fleet had a start that matched the conditions on the water: picture perfect. Almost the whole fleet was spread out from the signal boat to the pin and all in a straight line just shy of the start line when the signal to go went off.

Michael Compton from Australia won his third consecutive race keeping him in contention for a top three finish. Overall leader in the gold fleet, Emilios Monos of Greece finished third, five places ahead of his nearest competitor in the standings, Yalcin Citak from Turkey, giving Monos a modest cushion of 11 points going into the final race of the Championship. In a challenging Gold fleet, the Championship was still very much in contention. Monos and Citak had been trading places with each other at the top of the standings throughout the Championship, and the opportunity for one final change of place remained. The Girls fleet that followed was a little bit ragged at the start, but no one was over early.

Matilda Nicholls, the overall leader of the Girls fleet, had just been planning a conservative race, holding back a little at the start line and avoiding any yellow flags for rule 42 penalties, basically keeping out of trouble. But trouble came looking for her. At a mark rounding, the boat just ahead of her had some difficulty and Matilda made a sudden move to avoid getting embroiled and suddenly found herself in the water with her boat starting to sail away! The shock of hitting the water was quite a jolt, and fortunately her boat capsized before getting too far away so that she could swim and recover it. But trying to get back up and going again led to a second capsize.Still, she kept her composure and managed to limit the damage, eventually tracking a couple of boats down over the rest of the race and finishing 11th. Even so, a comfortable lead in the Championship had narrowed noticeably as Australian Paige Caldecoat won that race, and Ireland’s Eve McMahon finished sixth. In the final race, Nicholls wouldn’t have to be perfect, but she would need to be good.

In the second race of the day, It was actually the bronze fleet that was the most well behaved in the final start. They spaced themselves out along the line and held back enough to make an easy call for the race officer: “all clear”. Previously, the Gold fleet was the most aggressive. With the championship on the line, and many other sailors trying to move up in the standings, a few too many boats were over the line under U flag and the Race Officer had to recall the fleet. Even the Black flag was not enough of a deterrent as the fleet pushed across the start seconds before the signal, with one sailor identified on the course side: Zac Littlewood, who was pushing hard to see if he could gain any ground on the few sailors in front of him, it was a disappointing end to his bid for another World Championship title. Under the second black flag restart, they were able to get under way with no further difficulty.

Unfortunately for Greece’s Emilios Monos, he didn’t have a great start, and while he was able to make up some ground on the first downwind leg, he fell back near mid fleet heading upwind. Monos believed he was being deliberately interfered with in the race and filed a protest and a request for redress. But on the water, it was a disappointing 21.

Meanwhile, Yalcin Citak sailed as consistently as he had throughout the Championship, finishing 6th. There was certainly a celebratory mood among the sailors and coaches of the Turkish team coming off the water. But then they would have to see what the findings of the jury would be. After lengthy deliberations, Monos was not able to prove to the jury that he had been interfered with, and in the end the results from the competition on the water stood: Yalcin Citak had won a second major Championship this month! After the awards ceremony, a relieved Citak discussed the regatta. He had started the first race of the Championship with a DSQ, but he said, “I just put that out of my mind and tried to focus on each race. It didn’t matter how things went in the previous race. Every race I just had to sail my race, and not be conservative or worry about what happened before. I did learn from that first race though, the mistake I made. I know what I did wrong and so would not make that mistake again.”

After the awards and the closing ceremony, the boats were all packed up and the commotion subsided. So much sailing talent began to disperse to various regions of this earth, whether to their next event, or back home to celebrate or lament. Some competitors fell short of their goals while others met or even exceeded them.