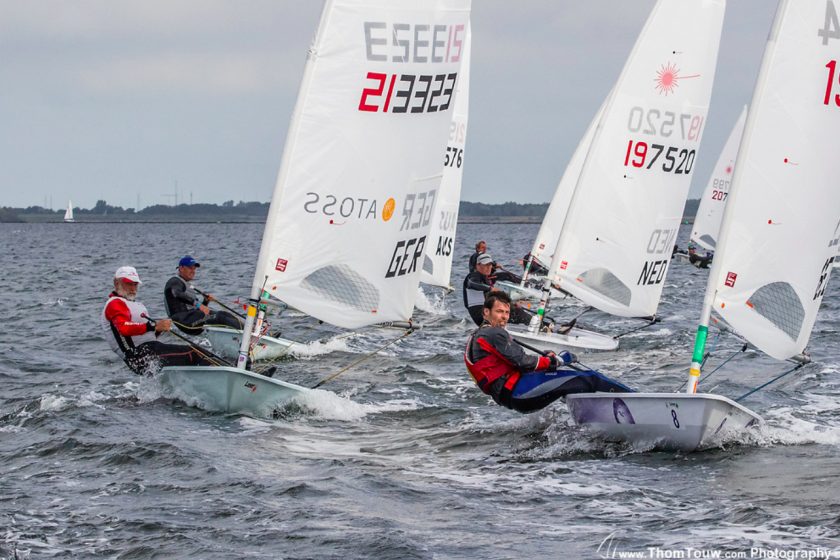 A good day to race sailboats in Zeeland! A bit cloudy in the morning, with 8-10 knots out of the SW. The skies cleared in the afternoon and the wind built to the mid-teens. All fleets sailed the two races scheduled for the day and were off the water before 1700.

The Standard fleets were the first on the water today, and the competition remains tight. In the Apprentice fleet, Jared West (ESP) and Dave Ridley (NZL) are now tied for the lead, with Eduardo Van Vienen (NED) trailing by one point. Serge Kats (NED) has a healthy lead in the Masters fleet, after a pair of seconds today, as does Wolfgang Gerz in the GGM fleet. Scores in the GM fleet tightened up after the two leaders, Carlos Martinez (ESP) and Tomas Nordqvist (SWE), scored double-digits in the second race, putting Stefan Nordstrom (SWE) in a close third.

The Radial fleets began racing in the early afternoon. Most of these fleets have a clear leader – Jon Emmet (A, GBR), Gilles Coadou (GM, FRA), and Jeff Loosemore (GGM, AUS). In the Masters fleet, Scott Leith (NZL) is in front, but is closely followed by Anders Mattson (SWE), Peppu Marinelli, Leydet and Jean-Christophe (FRA). And in the Legends fleet, Kerry Waraker (AUS) is trailed by only one point by Johan Van Rossem (CAN), and by only five points by Kevin Phillips (AUS).

Bottom line, the leader board is likely to change with the racing tomorrow, and the weather forecast looks good for sailing. Stay tuned to see how it turns out!