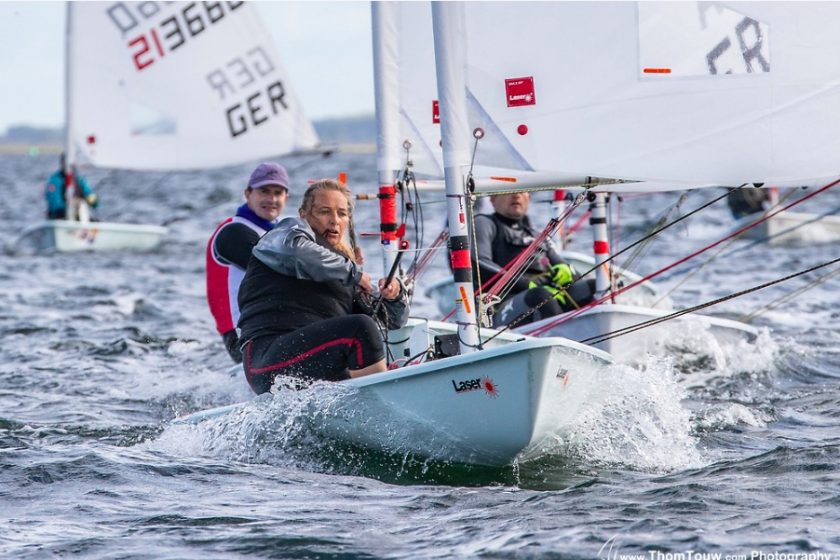 Another good day on the water with two races for all fleets.  These were races 9 & 10 for the event, except for the Standard GM/GGM fleets, which are lagging by one race.  The wind held steady out of the North at 10 knots, on average, but there were short-lived fluctuations to the left and right and definite differences in pressure.  Big gains for those who took advantage of them, and losses for those who didn’t.

The Radials were first on the water for the 1030 warning signal.  In the Apprentice fleet, Jon Emmett (GBR) increased his lead with a pair of bullets.  There’s still a battle for second, with Georgia Chimona (GRE) leading Javier Tejedor (ESP) by only four points.  In the Masters, Leith Scott (NZL), Anders Mattsson (SWE), and Leydet Jean-Christophe (FRA) lead the fleet, all with comfortable margins.

The Standards began racing in the early afternoon.  At the end of the day, only one point each separated the three leaders in the Apprentice fleet – Eduardo Van Vianen (NED), Jared West (ESP), & Dave Ridley (NZL).  Serge Kats (NED) has a strong lead in the Masters fleet (finishing 1st & 2nd today helped!), but only one point separates Adonis Bougiouris (GRE) and Brett Beyer (AUS), who are fighting for second.

This pattern holds for the GM & GGM fleets.  Carlos Martinez (ESP) is safely leading the GM fleet, but there’s a three-way tie for second place! Stefan Nordström (SWE), Gunni Pedersen Chr. (DEN), & Arne Nilsen Per (NOR) all have 57 points, and Tomas Nordqvist (SWE) is trailing that group by five points.  In the GGMs, Wolfgang Gerz (GER) is in front, but only five points separate Peter Serwin (GBR) and Michael Hicks (GBR).

With consistent wind today, and only a few general recalls (but a good handful of UFD & BFD penalties!), sailors were off the water by 1630 to enjoy paella at the hospitality tent.  Social events continue with a party this evening, and then a final day of racing before closing ceremonies tomorrow night.