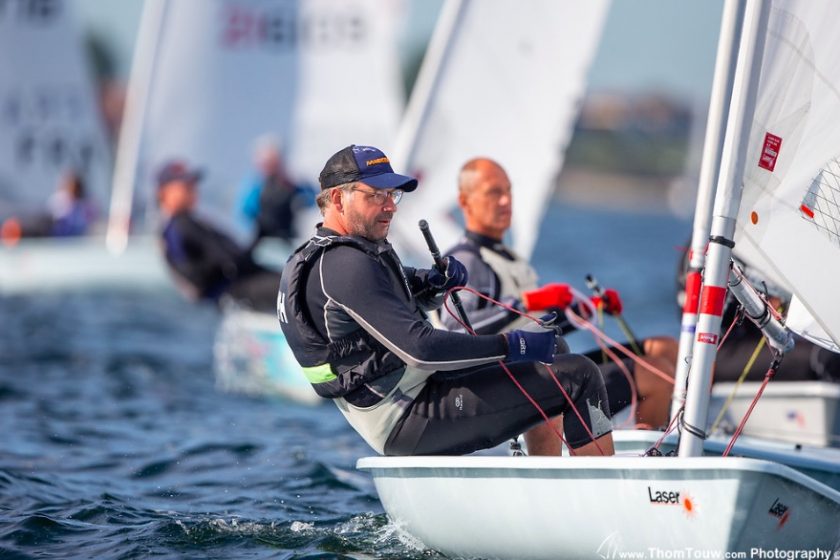 Tentative winds out of the East, but racing still happened.  The Standard fleets sailed out earlier than usual for at 1000h first signal.  They completed both of the scheduled two races in 5-7 knots.  The G-flag for the Radials dropped at 1100h and they were out to the starting area by noon.

All of the Radial fleets completed one race, but (as forecast) it began to fade in the early afternoon and RC signaled N over A…all races abandoned to shore.  The first group of Radials were on the course and lost that race, but the other two groups never got the chance to start.  The wind was good for most of the week, but not today, at least after noon.

In the Standard Apprentice fleet, Dave Ridley (NZL) won the tie-breaker over Eduardo Van Vianen (NED), followed by Jared West (ESP) by one point.  Serge Kats (NED) decisively won the Masters fleet, trailed by Brett Beyer (AUS) and Adonis Bougiouris (GRE).  Carlos Martinez won the GM fleet, and Wolfgang Gerz the GGM fleet, but it was a battle for second place in both fleets.

In the Radial Apprentice fleet,  Jon Emmett (GBR) held his first, as did Leith Scott (NZL) in the Masters fleet, but only by three points over Anders Mattson (SWE).  In the GM fleet, Gilles Coadou (FRA) on finished first, but led Kim Tan (NED) by only four points.  Tight racing all around!

Jeff Loosemore (AUS) had clear lead in the GGM fleet, but in the Legends fleet,  Kerry  Wareker (AUS) was only one point ahead of Johan Van Rossem (NED), who led Kevin Phillips (AUS) by only two points.

And so, the week wraps up.  A full listing of scores is posted on the event website: http://2019-masters.laser-worlds.com.

It was a good week of racing, with a bit of rain early on and light winds today, but with 11 or 12 races sailed for all fleets.  Hope that all enjoyed the racing and the hospitality.